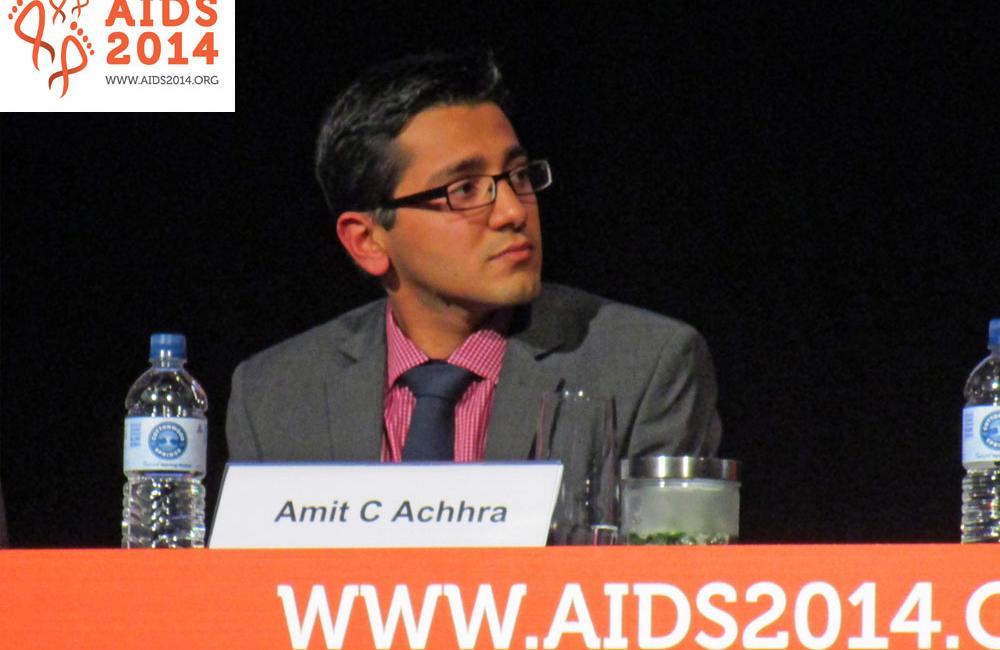 Amit Achhra, from the Kirby Institute in Sydney, presenting at AIDS 2014. Photo by Liz Highleyman, hivandhepatitis.com.
This article is more than 8 years old. Click here for more recent articles on this topic

People with HIV in the normal weight range who gain a substantial amount of weight shortly after starting antiretroviral therapy (ART) may have an increased risk of cardiovascular disease and diabetes, according to findings from the D:A:D study presented this week at the 20th International AIDS Conference in Melbourne.

Several observational studies - including the large international Data Collection o­n Adverse events of Anti-HIV Drugs (D:A:D) study - have found that people with HIV have higher rates of cardiovascular disease and metabolic conditions such as diabetes. However, the relative contributions of HIV infection itself, resulting inflammatory and metabolic changes, antiretroviral toxicities, and other factors are not yet fully understood. Many people with HIV gain weight after starting ART, and this may have a detrimental effect on health.

Amit Achhra from the Kirby Institute in Sydney and colleagues looked at the relationship between short-term changes in body mass index (BMI) after treatment initiation and subsequent risk of cardiovascular disease and diabetes in the D:A:D cohort.

About three-quarters of participants were men, the average age was approximately 40 years and about 5% had a family history of heart disease. Before starting ART 6% were underweight (BMI <18.5), 64% were normal weight (18.5-24.9), 23% were overweight (>25) and 6% were obese (>30). The median CD4 T-cell count was approximately 270 cells/mm3 in the latter three groups, but only 170 cells/mm3 in the underweight group, reflecting more advanced disease.

Overall, about one-third of participants were current smokers - although heavier people were less likely to smoke - and about 10% had hepatitis C virus coinfection. As expected, overweight and obese participants had higher blood pressure and were more likely to have pre-existing diabetes, rising from 1.6% among underweight people to 6.8% in the obese group.

The researchers looked at a composite cardiovascular disease endpoint that included myocardial infarctions or heart attacks, strokes, sudden cardiac death and related surgical procedure such as coronary artery bypass or angioplasty. Diabetes assessment was based on medical records or use of anti-diabetic drugs.

A total of 97 cardiovascular disease events occurred during nearly 44,000 person-years of follow-up, for a rate of 2.21 per 1000 person-years. Of these, 46 were heart attacks, 33 were strokes and 18 were invasive procedures.

The cardiovascular event rate (again, per 1000 person-years) rose with increasing body weight: 1.73 in the underweight group, 2.13 in the normal weight group, 2.41 in the overweight group and 2.78 in the obese group. After adjusting for demographics and other factors, a 1-unit gain in BMI was associated with an 18% increased risk of cardiovascular events in the normal weight group. However, people in the underweight, overweight and obese groups did not see a significant change in risk.

Turning to diabetes, a total of 125 new events occurred among the 9193 participants who did not have diabetes at study entry, a rate of 2.89 cases per 1000 person-years. As with cardiovascular disease, the likelihood of developing diabetes rose with body weight, though the risk increased more sharply: 2.04, 2.01, 4.05 and 9.97 events per 1000 person-years in the respective weight categories. After adjusting for other factors, a 1-unit gain in BMI was associated with about a 10% increased risk of diabetes across all categories.

Findings were similar in sensitivity analyses that excluding people with a history of injecting drug use and those with undetectable HIV viral load (<400 copies/ml) at one year after starting ART. Achhra noted that people who inject drugs IDU are at  higher risk for heart problems not related to atherosclerosis.

"Short-term gain in BMI post ART initiation could be associated with the increased risk of cardiovascular disease, largely in those with normal/mid-levels of pre-ART BMI," the researchers concluded. "Gain in BMI also associated with risk of diabetes in all groups."

However, they added that there was "no appreciable change in risk of cardiovascular disease with gain in BMI in those with high pre-ART BMI."

As a limitation, they noted that BMI may not reflect abdominal or central obesity - which is most strongly related to metabolic abnormalities and heart disease - and the study did not have access to information about diet or exercise, which can affect risk independent of weight.