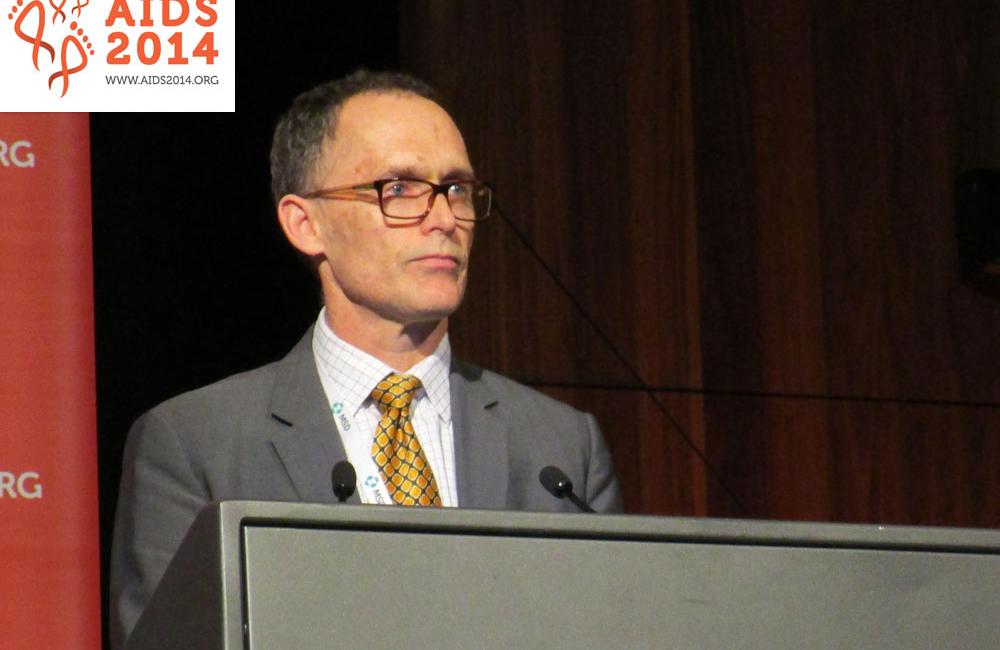 Andrew Grulich, from the Kirby Institute at the University of New South Wales, presenting at AIDS 2014. Photo by Liz Highleyman, hivandhepatitis.com
This article is more than 8 years old. Click here for more recent articles on this topic

While some experts favour routine treatment of HSIL – which may involve chemotherapy, radiation, cauterisation (burning) or surgery – this view is controversial. HSIL is "extraordinarily prevalent" – occurring in up to half of gay men living with HIV – and treatment is extremely difficult with a high rate of recurrence and adverse events, Grulich explained. "Watchful waiting" with treatment targeted only to the highest-risk cases may be a viable alternative.

This interim analysis included the first 450 men recruited through June 2014. All were aged 35 or older, with a median age of 49 years. About 30% were living with HIV.

Among 197 men without HSIL at baseline, there were 45 incident or new cases of HSIL. Overall HSIL incidence was 16 cases per 100 person-years – or about one in six men each year. However, the incidence rate was nearly twice as high for HIV-positive compared to HIV-negative men (23 vs 13 per 100 person-years, respectively), though the difference did not reach statistical significance (p = 0.061). HSIL incidence did not differ significantly by age.

Looking at HPV results, men who tested positive for HPV-16, HPV-18, or any high-risk HPV type at baseline were significantly more likely to develop HSIL. Men with persistently positive HPV-16 had a high incidence of HSIL (56 per 100 person-years), but the highest rate was seen among men who started out HPV-16 negative but became infected during the study (116 per 100 person-years). Incident HSIL was uncommon among men without chronic HPV infection

San Francisco recorded its first year-over-year increase in new HIV infections in nearly a decade in 2021, though at least some of those cases likely were in people who became infected in 2020 and only tested positive last year due to pandemic lockdowns and other restrictions that led to testing delays.
San Francisco Chronicle
14 Sep 22
Resistance

Patients with low HIV viral loads are just as likely to harbour HIV variants with drug resistance mutations as those with high viral loads.
The Conversation
6 Sep 22
Epidemiology

Ghana recorded a reduction in new infections and related death cases of AIDS by 26 per cent and 38 per cent respectively between 2017 and 2021.
AllAfrica
31 Aug 22
HIV treatment