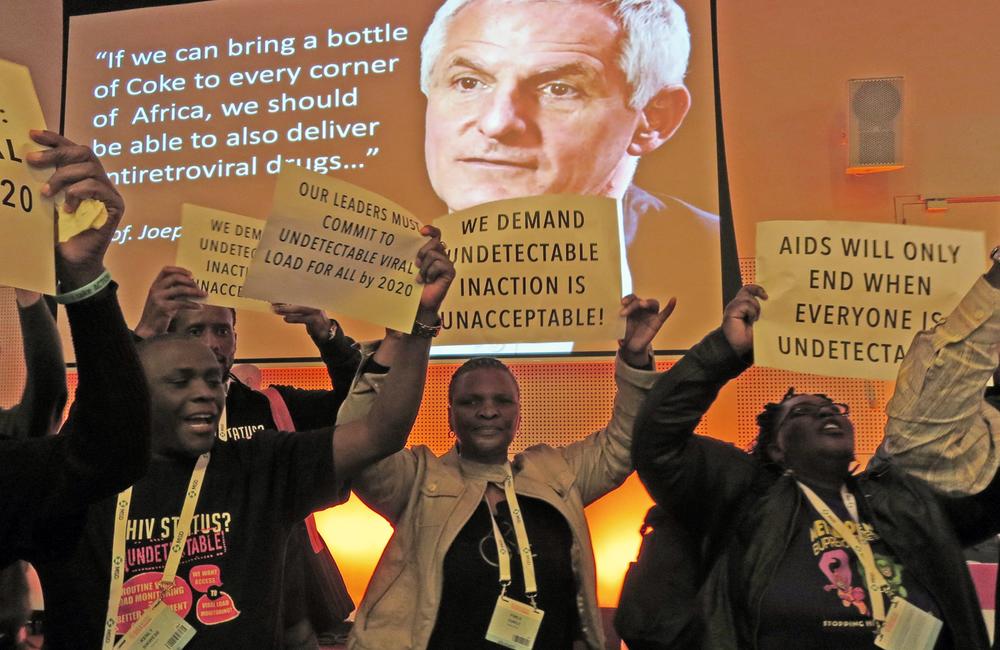 Activists call for '100% undetectable by 2020' target on the opening day of AIDS 2014. Professor Joep Lange appears on screen. Photo by Liz Highleyman, hivandhepatitis.com
This article is more than 8 years old. Click here for more recent articles on this topic

The 20th International AIDS Conference (AIDS 2014) opened in Melbourne, Australia, on Sunday evening overshadowed by the deaths of 298 passengers aboard Malaysian Airlines flight MH17. Six delegates on their way to the conference were amongst those killed, including Professor Joep Lange, a former President of the International AIDS Society.

A one-minute global moment of remembrance was held in honour of the delegates who lost their lives at the beginning of the opening ceremony with eleven former, present and future Presidents of the International AIDS Society onstage together with representatives from those organisations who lost colleagues, the World Health Organization, AIDS Fonds, Stop AIDS Now, The Female Health Company, the Amsterdam Institute for Global Health and Development and members of the Dutch HIV research community.

“The extent of the loss of our colleagues and friends is still hard for me to comprehend or express”. Professor Françoise Barré-Sinoussi

Professor Françoise Barré-Sinoussi, the current President of the International AIDS Society, told delegates, “The extent of the loss of our colleagues and friends is still hard for me to comprehend or express”.

Numerous tributes to Professor Joep Lange’s three-decade career in HIV medicine and advocacy have emphasised his central role in pioneering access to affordable combination antiretroviral therapy in lower-income countries. Professor Lange was also an early advocate for the necessity of using triple regimens of antiretroviral drugs from different classes in order to control HIV replication effectively.

Joep Lange “has always told us to keep our eye on the ball and to pursue the end of the AIDS pandemic," said Anthony Fauci, Director of NIH’s National Institute of Allergy and Infectious Diseases (NIAID) in a video statement.

In his plenary address, UNAIDS Executive Director Michel Sidibé told delegates that the UN was committed to ending AIDS by 2030 and at a UNAIDS satellite meeting he made it clear what this meant: 90% of people with HIV diagnosed, 90% of diagnosed people on treatment and 90% of those on treatment with undetectable viral load by 2020. If this goal could be achieved, says UNAIDS, 73% of people living with HIV will have fully suppressed viral load by 2020, greatly reducing HIV transmission and substantially reducing deaths from AIDS. This target would require greatly increased treatment coverage: worldwide approximately 37% of people living with HIV are receiving treatment but coverage varies widely between countries.

Reflecting the conference theme of 'Stepping up the pace', activists at the conference pressed for undetectable viral load for all by 2020 and called for action to ensure that viral load testing and antiretroviral treatment are fully funded.

“Now, more than ever, we must concentrate our limited resources on where most infections occur and on where most people die,” said Sidibé. “The world needs a new “catch-up” plan for the 15 countries that account for 75% of new HIV infections.”

The conference will also feature a new emphasis on key populations – men who have sex with men, sex workers, people who inject drugs, transgender women – who have a heightened vulnerability to HIV infection but also suffer from discrimination and criminalisation. The World Health Organization recently issued new guidance on HIV prevention, diagnosis, treatment and care for key populations.

A video of the opening session is available on the conference YouTube channel.

What works to reduce HIV stigma?

AIDS 2022 looked at new ways to tackle one of the oldest issues facing the HIV response.
Be In The Know
10 Aug 22
Access to healthcare

A group of HIV and AIDS patients in India's capital city Delhi is protesting an acute shortage of anti-retroviral drugs. They say the government agency that distributes the medicines has asked them to switch their regimen, endangering their lives.
Deutsche Welle
10 Aug 22
Monkeypox

Vaccine tourism is back as people seek to protect themselves against illness and stigma.
POLITICO
10 Aug 22
Injectable & long-acting PrEP

The drug cabotegravir could be a game-changer in the fight against HIV/AIDS — but we need to know why it costs so much.
Nature (editorial)
10 Aug 22
Access to healthcare

Plaintiffs argue their religious freedom has been violated as both are Christian and unwilling to buy health insurance that subsidizes, “abortifacient contraception or PrEP drugs that encourage homosexual behavior and intravenous drug use.”
The Hill
10 Aug 22
More editors' picks