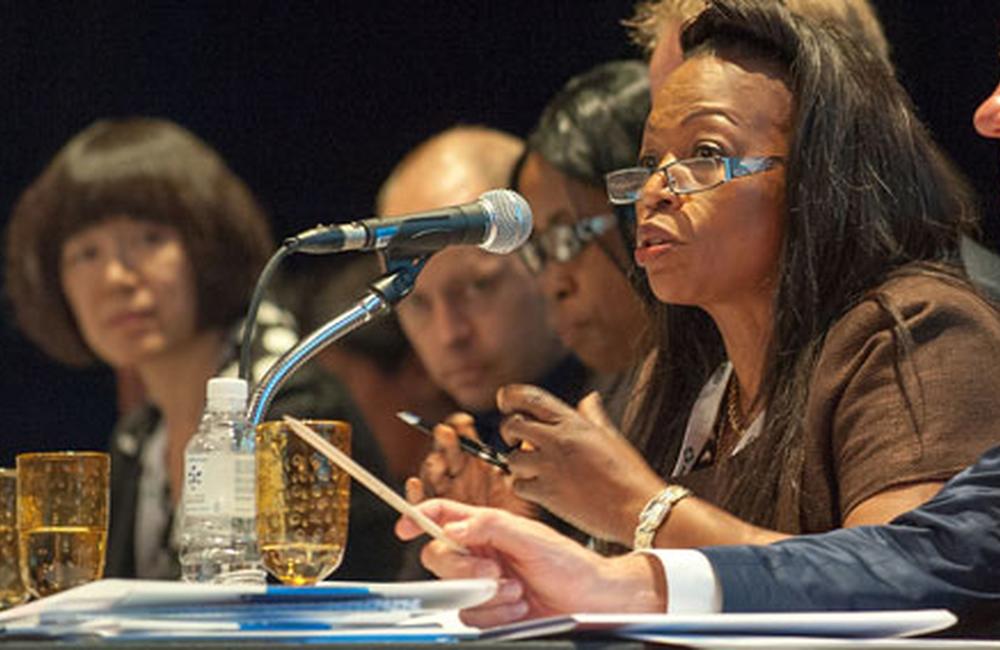 New World Health Organization (WHO) guidelines recommending antiretroviral treatment for all children under the age of 5, and treatment for all older children and adolescents with CD4 counts below 500 cells/mm3 will, need to be backed-up by efforts to greatly improve early infant diagnosis, together with development of easier-to-take antiretrovirals for children, paediatric experts told the 7th International AIDS Society conference (IAS 2013) in Kuala Lumpur on Monday.

Two million children already eligible for antiretroviral therapy (ART) are still not receiving treatment in low- and middle-income countries, Maria Penezzata of the WHO told a satellite meeting on treatment access for children organized by the Drugs for Neglected Diseases Initiative, UNITAID and the Medicines Patent Pool.

"...implementation and treatment access will require the full support of donors, international and national regulatory authorities, national HIV programmes, civil society, and people living with HIV themselves to make this a reality for HIV-infected children." Marc Lallemant, DNDi

The new WHO recommendations, issued on 30 June, will increase the number in need of treatment by around 750,000, but she expressed concern about the speed at which the number of children being treated is growing. “ART coverage increased by less than 10% between 2011 and 2012,” she told the meeting. In comparison, adult ART coverage grew at its fastest rate ever in the same period.

Although some countries in southern Africa have already achieved what UNAIDS defines as universal access – treatment for greater than 80 to 85% of those in need – global coverage of treatment stood at 34% in 2012.

The biggest obstacle to early treatment for children is the failure to diagnose HIV in the first weeks of life. The proportion of children exposed to HIV who receive HIV DNA testing ranges from 81% in Swaziland and 88% in South Africa to just 4% in Nigeria.

Children may not be tested because their health records fail to note that they have been exposed to HIV, but important opportunities for testing are also missed at immunisation clinics, attended by over 80% of mother-and-infant pairs in many countries in sub-Saharan Africa. A greater focus on integrating early infant diagnosis into immunisation clinics, together with better health information systems to ensure that HIV-exposed infants are not lost after delivery, would be significant steps forward in improving rates of early infant diagnosis, said Chewe Luo, Senior Adviser on HIV/AIDS at UNICEF.

Better integration of adult and infant HIV care would also help in initiation of more children on treatment. In Thailand, for example, there are 1016 clinics where adults can start ART, but only 616 clinics where children can start ART, and many children are still initiated on ART by a specialist physician at a hospital rather than a nurse at a local health clinic. More personnel trained in paediatric HIV care would allow children to start treatment at a wider range of treatment centres, said Dr Thanyawee Puthanakit of the Department of Paediatric Medicine at Chulangakorn University, Bangkok.

Greater awareness of HIV, its symptoms and its treatment in children among the community would also help to increase the number of children treated. Many parents believe that if a child born to parents with HIV is not sick within the first two years of life, there is little chance that the child has HIV, and so they do not seek testing for the child, said Dr Puthanakit.

The development of new drug formulations will be essential for the achievement of wider access to treatment for children, experts agree.

Emma Hannay of UNITAID, the international drug and diagnostics purchase fund for HIV, TB and malaria told the meeting that despite the number of children already being treated for HIV worldwide, the paediatric HIV treatment market amounted to only USD 36 million a year, making it difficult to attract new entrants into an already highly fragmented field. Numerous single-drug products are available for younger children, but there are no fixed-dose products that support the implementation of new WHO guidance.

The new WHO guidelines recommend that all children below the age of three should be treated with lopinavir/ritonavir combined with abacavir and 3TC or with AZT and 3TC. In cases where lopinavir/ritonavir is not available nevirapine should be used instead. In older children, efavirenz is preferred to nevirapine, although WHO acknowledges that the evidence to support this recommendation for older children is of low quality.

Although WHO sought to standardise treatment for all as much as possible, the lack of availability of paediatric formulations of some antiretrovirals in many countries means that a variety of drugs are recommended for use in combination with efavirenz for children aged 3 and over.

The only way to give lopinavir/ritonavir and other key antiretrovirals to small children is in liquid form. Lopinavir/ritonavir liquid has an unpleasant taste and each dose needs to be measured carefully with a syringe in order to ensure that the child is not under-dosed. Unlike nevirapine-based ART for children, no tablet form exists that is suitable for small children.

The Drugs for Neglected Diseases Initiative (DNDi) is currently working with the Indian pharmaceutical company Cipla to develop two combination capsules containing granules of lopinavir/ ritonavir, 3TC and either abacavir or AZT. It hopes that these products will be ready for registration by 2015. The product is designed either to be swallowed or to be opened so that the granules can be mixed with liquid or soft food. Current tablet formulations of lopinavir/ritonavir cannot be split or ground to powder without the risk of inadequate dosing, making it difficult to adapt them for children who cannot swallow pills.

"We are racing against the clock to ensure rapid delivery of a new 4-in-1 ARV medicine for young children," said Dr Marc Lallemant, Head of DNDi’s Paediatric HIV Programme. "Yet getting from the recommendations to actual implementation and treatment access will require the full support of donors, international and national regulatory authorities, national HIV programmes, civil society, and people living with HIV themselves to make this a reality for HIV-infected children."