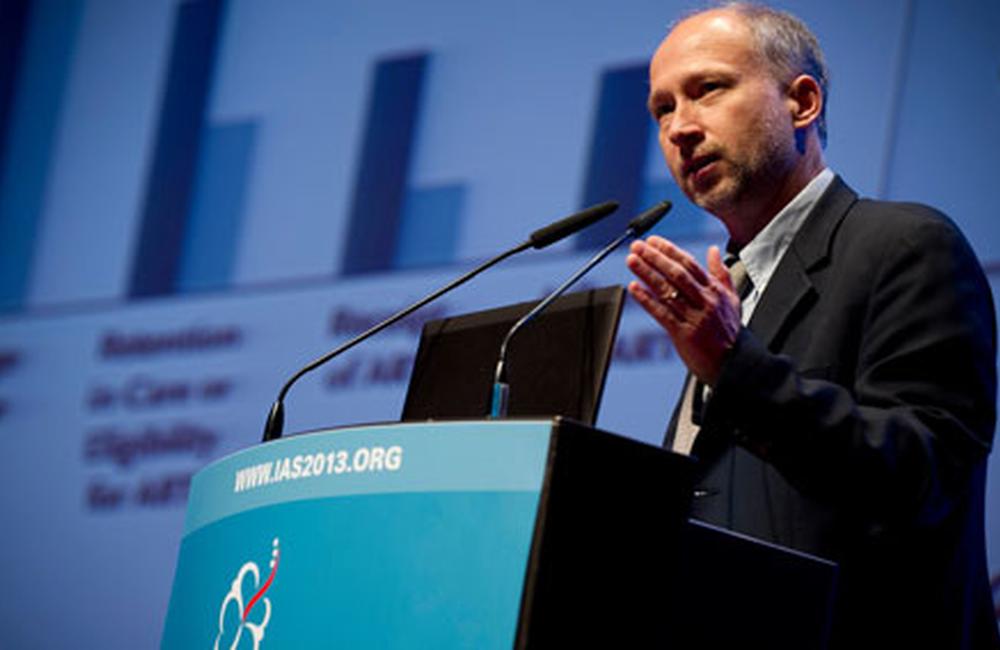 Other diseases are becoming far more important than AIDS for people with HIV who have consistent access and good response to antiretroviral treatment, and management of age-related comorbidities will become an increasingly important aspect of HIV medicine worldwide in the coming years, Steven Deeks argued in his keynote address yesterday at the 7th International AIDS Society Conference on HIV Pathogenesis, Treatment and Prevention (IAS 2013) in Kuala Lumpur.

Deeks, from the University of California at San Francisco, has done extensive research on both ageing with HIV and cure-related strategies. Preceding the conference, he co-chaired a two-day Towards an HIV cure symposium with IAS president Françoise Barré-Sinoussi and Sharon Lewin from Monash University.

Among people living with HIV who are on effective antiretroviral therapy, the virus is kept under control, the immune system works pretty well and AIDS-related conditions are uncommon, Deeks said. "For people with drug-susceptible virus, who are motivated to take the drugs, and who have lifelong access to therapy, AIDS is no longer the problem." Instead, he explained, "HIV is looking a lot like other chronic diseases," characterised by persistent low-level immune activation and inflammation.

Several studies have shown that HIV independently confers an excess risk for cardiovascular disease and other non-AIDS conditions. A large US veterans cohort study that compared HIV-positive and -negative people, matched for age and other factors, found that people with HIV had about a 1.5-fold higher rate of heart disease – about the same excess risk associated with having diabetes. Effects of a similar size have been seen for bone loss, neurological impairment, kidney disease and certain types of cancer, Deeks noted.

Another study found that people living with HIV who are in their fifties have as many comorbidities, on average, as HIV-negative people 10 or 15 years older. "It looks like [HIV] adds a decade in terms of age-associated conditions," he said.

People with treated HIV have increased levels of multiple markers of inflammation. And these markers – especially interleukin 6 and D-dimer – predict excess risk of morbidity and mortality.

"If we venture out of the HIV world into rheumatology, cardiology and especially geriatrics, similar observations are made," Deeks continued. "Chronic inflammation is at least predictive – and probably causal – of comorbidities in study after study."

Heart attacks and the like are uncommon at age 40 to 50, so HIV has not yet had a major effect on absolute numbers, but is likely to do so as people age, he warned. "While most people with HIV are young now, as people on therapy get older – into their sixties, seventies and eighties – all these other diseases could add up to problems."

"I spend my time in the clinic talking about exercise, management of lipids, a Mediterranean diet, and so forth...We should all be helping our patients in their forties and fifties live to their seventies and eighties, so they're around for a cure." Steven Deeks

Furthermore, these conditions – mostly studied so far in the US and Europe – "are now playing out in developing world," Deeks said. "In Africans we're seeing a higher number of comorbidities even though the population is younger. The same thing that's happening in the US is likely happening on a global level." These excess comorbidities and the shift to chronic disease management could overburden already stretched healthcare systems.

But fortunately, Deeks continued, we can do something about it.

We know a lot about mechanisms of inflammation, why inflammation might cause disease and targets for potential therapies, he said. There are multiple drugs in the pipeline to try to reverse the process, as well as increasing evidence that starting antiretroviral treatment early rather than late may help prevent long-term residual inflammation (now being investigated in the START study).

Now that HIV is a chronic disease, Deeks argued, "we need to switch our focus from acute to chronic care, which requires a whole new set of skills and changes in the healthcare system."

Ultimately, he concluded, the various problems associated with chronic HIV disease – excess inflammation, heart disease, overburdened health systems, not being able to afford lifelong therapy – "could all be addressed by a cure."

"There's a tremendous amount of excitement and a bit of optimism that we're making enough progress that eventually we'll be able to cure the disease," Deeks continued. "But there are also substantial barriers to curing HIV infection – and some of them may be insurmountable."

Making an analogy with the development of antiretroviral drugs, he suggested that cure research is where antiretroviral therapy research was in the late 1980s, when we were learning about pathogenesis, how to measure HIV and beginning to identify potential targets to go after the virus.

Today we are trying to measure residual HIV in long-term treated people and have seen that certain agents can affect the biology of the virus. But "going after free virus [in the blood] was a lot easier than virus hidden in cells," he emphasised. "We have to find some ways to get in there without harming the patient."

The Towards an HIV cure meeting featured a lot of cutting-edge research, some of which will be presented during the week at the main IAS conference. Researchers will talk more about the case report of a baby in Mississippi, presented at this year's Conference on Retroviruses and Opportunistic Infections (CROI), which Deeks thinks "represents a clear-cut cure". There will be late-breaker presentations on allogeneic stem cell transplantation and small molecules that can "upset the steady state" of the viral reservoir.

"My geriatrician [colleagues] say if you want patients to be playing tennis in their 70s, you need to be dealing with that in their forties," Deeks said. "I spend my time in the clinic talking about exercise, management of lipids, a Mediterranean diet, and so forth...We should all be helping our patients in their forties and fifties live to their seventies and eighties, so they're around for a cure."

Video and presentation slides from the opening session are available on the IAS website: http://pag.ias2013.org/session.aspx?s=64

"We must debunk beliefs among healthcare professionals that older adults are not sexually active or use drugs, and misconceptions among older adults that they are not at risk of HIV", says Dr Garcia Carus.
EurekAlert
8 Jul 21
Ageing & HIV

Our Days Are Numbered

As I face open-heart surgery, I wonder how my elders in the HIV movement are best served, whether the elderly even need HIV services and what they might look like.
POZ
4 May 21
Mental & emotional health & wellbeing

Diagnosed with HIV at 30, I am delighted to still be alive

Tony Whitehead: "When I tested HIV positive in 1985, I thought I was going to die – and my family did too. That’s what people thought back then."
Metro
28 Apr 21
More editors' picks