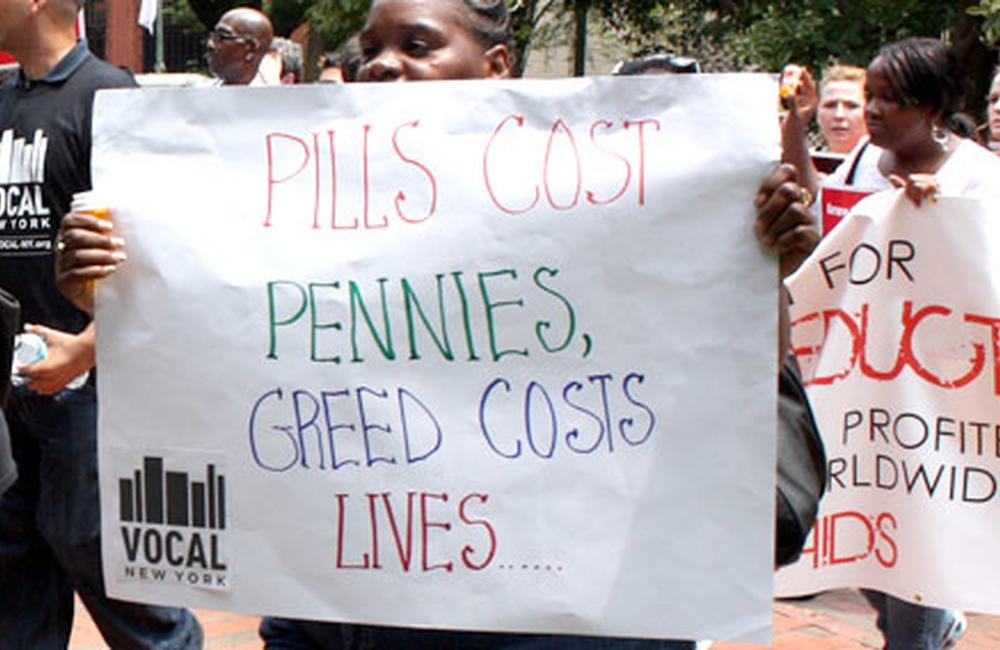 Protester at the We can end AIDS! march in Washington. Image by Greta Hughson / aidsmap.com
This article is more than 9 years old. Click here for more recent articles on this topic

Patents and intellectual property restrictions continue to affect access to antiretroviral drugs, particularly in middle-income settings, according to research presented at the 19th International AIDS Conference (AIDS 2012) in Washington DC on July 25.

The price of branded second-line drugs has actually been increasing since 2008/2009, says Moatti, part of a general trend among pharmaceutical companies to increase the price of their product at the end of a patent life. While there is an average dip in price a few years into the 20-year period – due primarily to pressure from generic competitors – the price actually increases before the drug goes off patent, and increases even more after the patent has expired.

“When the patent is over, branded drugs don't try to follow the generic companies and engage in competition," said Moatti. Instead, in both developing and developed world markets, "they try to differentiate their product with packaging and so on”, keeping the price high.

Chan Park, the interim executive director of the Medicines Patents Pool, presented an analysis of current trends in voluntary licensing practices globally. Park noted that engaging in voluntary licenses was "hugely common throughout the industry", with seven of the eight originator ARV companies signing such agreements. Yet, "there's very little known about the various provisions that can be included in these licenses….there is wide variance within the industry,” he said.

Considering access to medicine, Park is specifically concerned about the number of licensed generic companies included in each agreement, and whether licensees can produce their own active pharmaceutical ingredients (APIs), and/or purchase APIs from other generic suppliers.

"Limiting the number of licensees may hinder the robust generic competition that can bring prices down,” Park said. “As a general rule, the more competitors there are, the lower the price of the ARV." Given that the cost of APIs comprise a "significant proportion" of a final generic production cost, "there ought to be minimal restrictions on manufacture and sale of APIs by generic producers".

Park also noted that while low-income countries are generally "well covered" in the scope of voluntary licences, "we still have a long way to go with covering upper-middle-income countries."

Speaking on the panel, Kajal Bhardwaj of the Lawyers Collective noted that this was part of a trend by pharmaceutical companies to increasingly "cut out” middle-income countries from so-called “access policies”, in which pharmaceutical companies engage in voluntary licences and/or differential pricing, where lower-income and/or high burden countries pay less than their richer counterparts. This is despite the fact that, according to the Human Development Index, "more than half of the world's poor actually live in middle-income countries," said Bhardwaj, with huge economic discrepancies in places like India and South Africa.

As a result of the exclusion, Bhardwaj explained, middle-income countries have to "negotiate separately on a case-by-case basis with these companies, which makes it harder for them to get lower prices."

While middle-income countries could utilise TRIPS flexibilities, specifically compulsory licences, many do not have the legislative framework to do so, and are being pressured by the world's superpowers to ramp up intellectual property protection. (TRIPS – The Agreement on Trade-Related Aspects of Intellectual Property Rights – gives pharmaceutical companies the legal right to patent their drugs and applies to all the member states of the World Trade Organization.)

"What's happening with the global aid and the global trade structure and how that shapes our countries' decisions going forward should not be under-estimated," said Bhardwaj. "The reality is that we're actually going back on ten years of progress. The minute you have exclusions, you will be leaving many, many people out of treatment and access."

“Increasing access is more important than economics,” said da Silva. “This is about how we can save money to put more patients on treatment."

da Silva said that Brazil's president, Dilma Roussef, would consider compulsory licences for more antiretrovirals and other drugs, such as for non-communicable diseases. He noted that simply having the threat of utilising a compulsory licence is an important tool in negotiations with pharmaceutical companies.

But according to Brazilian activists, the country can do more to promote access to medicines. Pedro Villardi of the Brazilian Interdisciplinary AIDS Association, or ABIA, presented the outcomes of a survey done by the Working Group on Intellectual Property to consider whether and how pharmaceutical patents were blocking access to medicine.

By conducting a thorough patent search on ARVs, the group found multiple patents on a single medicine, which could block access to generic versions. For example, while the patent for darunavir is meant to expire in 2017, a new patent filed could extend the patent to 2025. Villardi also noted that eleven drugs included in the survey were only supplied by one producer; lack of competition was keeping prices high.

Villardi said that increased transparency was essential. “The patent system is extremely non-transparent and patents are supposed to be public,” he said. “If you don't know [about] the patent and the patent application…you can design neither public policies nor advocacy strategies to increase access to medicines, not just in Brazil, but in all of the global south."

View information on the session, including links to the abstracts and slides from the presentations, on the conference website.

2021 HIV Market Report: The state of the HIV market in low- and middle-income countries

CHAI releases the 12th issue of our annual HIV market report. This report provides a detailed look at the complex, ever-changing HIV commodity markets in low- and middle-income countries based on aggregated market intelligence from our work in over 30 countries.
Clinton Health Access Initiative
12 Oct 21
Activism & civil society

There are still low levels of access to vaccines in the low-income and lower-middle-income countries that are home to more than half (55%) of people living with HIV globally.
UNAIDS
11 Oct 21
Access to healthcare

The number of people without access to healthcare in Mexico rose from 20 million to almost 36 million between 2018-2020.
Washington Blade
4 Oct 21
Pharmaceutical industry

Gilead, Merck and others slapped with 'pay-for-delay' lawsuits over lucrative HIV and cholesterol meds