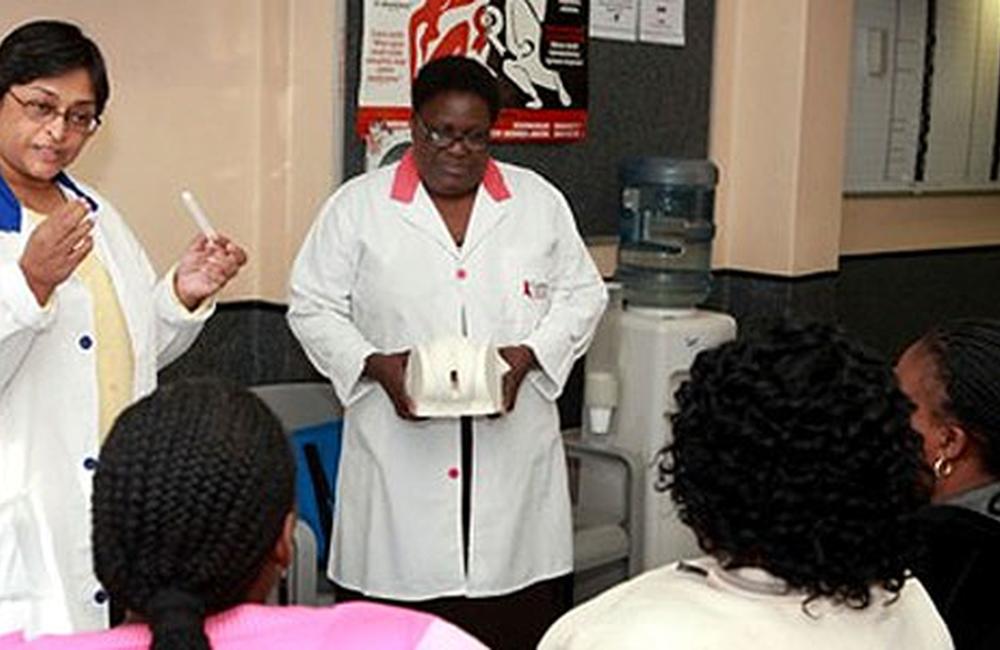 Prof. Quarraisha Abdool Karim, Associate Scientific Director of CAPRISA, explains how to use an applicator with gel. (Image: www.caprisa.org)
This article is more than 12 years old. Click here for more recent articles on this topic

A vaginal microbicidal gel containing the antiretroviral drug tenofovir (Viread) reduced the risk of HIV infection among women who received it by 39% during a two-and-a-half-year study in South Africa, the Eighteenth International AIDS Conference will hear tomorrow.

Go to the following day's presentation and report

Women who used it during at least four out of five sex acts had an even greater reduction in their risk of becoming infected (54% reduction), and the gel halved women’s risk of acquiring HSV-2, the virus that cause genital herpes. HSV-2 also increases the risk of HIV acquisition.

The results of this study have reinvigorated the field Professor Sharon Hillier, principal investigator of the Microbicide Trials Network

The study recruited 889 sexually active women in Kwazulu Natal province in South Africa, and randomised them to receive either a microbicide gel containing 1% tenofovir or a gel containing a placebo. Neither the women nor the trial investigators knew whether they were receiving the tenofovir gel during the study.

The study, known as CAPRISA 004, was conducted by Dr. Salim Abdool Karim of the Centre for the AIDS Programme of Research in South Africa (CAPRISA).

The results of the study had been kept under tight wraps, but the Financial Times broke the embargo early this evening.

Full results of the study will be presented at 1pm Central European Time tomorrow, but ahead of the presentation international bodies and agencies leading the microbicide research agenda welcomed the development.

“This study has established proof of concept that a vaginal microbicide containing an ARV can protect women from HIV. This is an incredibly important achievement for which the CAPRISA team is to be congratulated. For all of us in the HIV prevention field, this result has shown that it may be possible to leverage this initial success using a single ARV at the time of sex into more potent approaches that could be 50, 60 or even 70% effective for prevention of HIV. The results of this study have reinvigorated the field,” commented Professor Sharon Hillier, director of reproductive infectious disease research at the University of Pittsburgh School of Medicine, and principal investigator of the Microbicide Trials Network (MTN).

“These efficacy results are statistically significant and should be celebrated,” said Dr Zeda Rosenberg of the International Partnership for Microbicides, in reference to results of a previous microbicide study (HPTN 035) of another product, PRO 2000, that briefly excited the field. That study showed a result of borderline significance, and a subsequent, larger study, MDP 301, failed to reproduce the result.

“This is an important day,” said Yasmin Halima, director of the Global Campaign for Microbicides. “We now have evidence that a vaginal gel can help prevent HIV. This is good news for women, good news for the field, and a good day for science.”  “Today’s news energises the field,” Halima said. “We hope it urges others to support the expansion of programs for developing topical HIV-prevention products."

To stimulate and prioritise rapid action, WHO and UNAIDS announced tonight that they will convene an expert consultation in August with women’s health and HIV prevention advocates, scientists, microbicide research teams and product developers, and public health experts to discuss the next steps with the product.

A webcast of Tuesday's session (Safety and Effectiveness of 1% Tenofovir Vaginal Microbicide Gel in South African Women: Results of the CAPRISA 004 Trial) is now available on the Kaiser Family Foundation website.