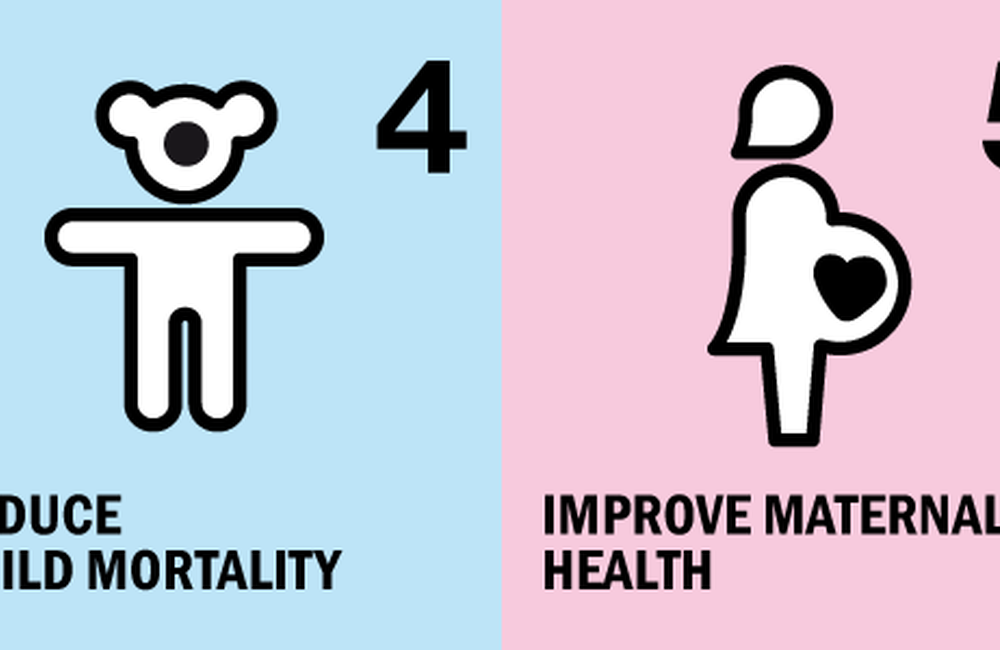 Millenium Development Goals 4 and 5. (Image: © UNDP Brazil.)
This article is more than 12 years old. Click here for more recent articles on this topic

Children born to mothers with HIV in a rural district of KwaZulu Natal were 75% less likely to die before the age of five if their mothers received antiretroviral therapy, researchers from the Africa Centre reported on Monday July 20th at the Eighteenth International AIDS Conference in Vienna.

The impact of HIV spending on other major health problems, particularly the Millenium Development Goals on child (MDG 4) and maternal mortality (MDG 5), has been limited to date, despite the compelling evidence of the impact of HIV on child and maternal mortality, particularly in southern Africa (see International AIDS Society position paper, Making Motherhood and Childhood Safer).

The study presented on Monday, carried out by the Africa Centre in KwaZulu Natal, extends research presented last year at the Fifth International AIDS Society conference in Cape Town and conducted by the same research group in the same district, which showed that antiretroviral therapy for mothers reduced mortality in children under two years of age.

The researchers used a well-established district population HIV surveillance study as the basis for an evaluation of the effect of maternal antiretroviral treatment on child mortality in under-fives.

The study evaluated the change in child mortality after the introduction of antiretroviral therapy in 2004. The researchers identified 300 live births in mothers with HIV between 2000 and 2006, and matched these women to mothers with HIV and mothers without HIV by age. They also assessed survival rates of the infants born to women with unknown and negative status. All women and the infants born to them during the period of interest were followed until the age of five.

Three hundred of 12,052 women who gave birth between 2000 and the end of 2006 initiated ART within five years after delivery.

Other studies on the impact of HIV spending on wider health system outcomes were less clear-cut in their findings.

Research in Rwanda, comparing 26 pairs of health centres, one providing HIV care and the other not, found that although centres providing HIV care showed a trend towards better outcomes with regard to a range of indicators including child immunisation, adult and child hospitalisation and curative visits to the health centre, the only indicator on which HIV clinics did significantly better was providing BCG vaccinations to all patients.

In Zambia, another study of health facilities found a significant relationship between the number of people receiving antiretrovirals and an increase in utilisation of family planning services by non-HIV patients (r=0.83, Spearman rank correlation test), between voluntary counselling and testing uptake and family planning service usage (r=0.30), and between uptake of PMTCT services and uptake of antenatal services (r=0.50).

However, researchers presenting study findings on the effects of HIV spending on other health system outcomes agreed that more research was needed, looking in particular at a wider range of settings and services, and taking into account the effects of other recent global health initiatives, notably GAVI, which has been supporting the purchase of vaccines for child immunisation.

Presentations by the speakers and their related abstracts are available from the official conference website.

In Ukraine, many mothers lack the formula milk and drugs needed to prevent mother-to-child transmission. We must not allow this war to undo decades of progress, says Olena Stryzhak.
The Guardian
5 Dec 22
Families & children

Labour Party commits to fertility equality for all HIV-positive people

Telling a child that he or she is living with HIV is not easy. Biénne Huisman spoke to a father and some doctors on how one approaches the issue.
Spotlight
30 Nov 22
More editors' picks