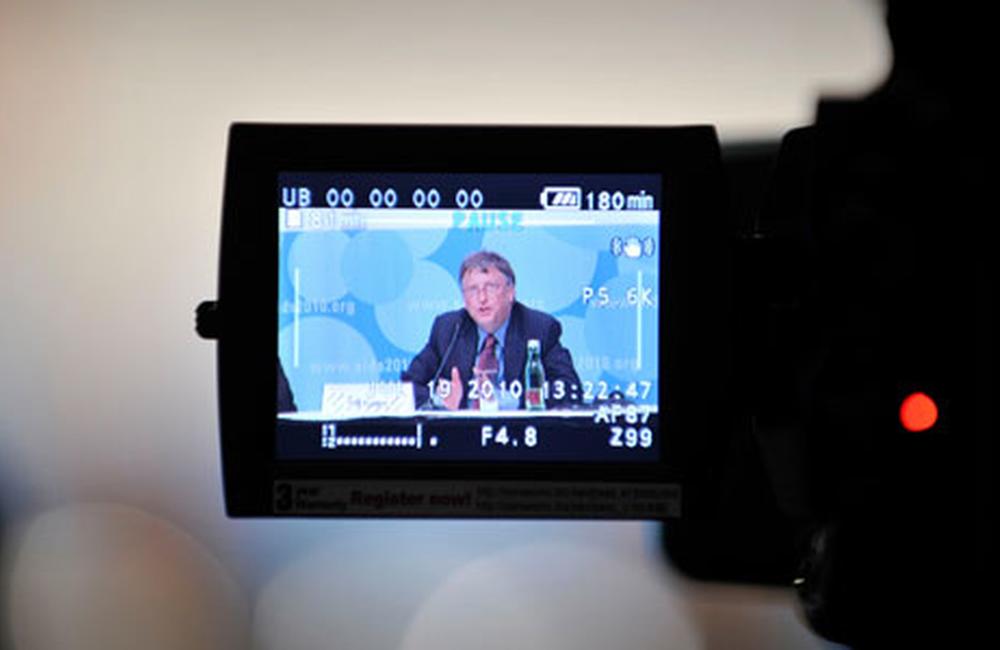 ©IAS/Marcus Rose/Workers' Photos
This article is more than 12 years old. Click here for more recent articles on this topic

The world lacks the means to treat its way out of HIV, Microsoft founder and billionaire philanthropist Bill Gates told the Eighteenth International AIDS Conference in Vienna on Monday.

However, he presented models that showed that we could cut current epidemics by 40% with the efficient and targeted use of simple prevention resources we have already. Adding in microbicides and pre-exposure prophylaxis (PrEP), which may be available in five years, could cut them by 60%.

Gates said: “If we push for a new focus of efficiency in both treatment and prevention and continue to innovate new tools we can start writing the story of the end of AIDS.”

We should be launching concerted drives to increase the provision of treatment to prevent mother-to-child transmission, and to roll out male circumcision programmes, he added.

“These are potentially so cheap and easy to supply it’s actually more expensive not to implement them.”

Gates admitted he had been sceptical about the potential impact of circumcision.

“I agreed it was effective, but I didn’t think lots of men would come forward for it. I was wrong: many young men are coming forward,” he said, pausing his presentation to show a short film about a 19-year-old in Swaziland who had done just that.

And yet male circumcision was not reaching nearly enough men: just 150,000 so far out of over 40 million who might benefit from it.

In the case of treatment to prevent mother-to-child transmission, he said: “I really don’t understand why only 45% of mothers have access to it; we should have it above 90%. We should go to each of the countries involved and we need to get political leaders to set tough goals. I’d like to see even in the next year a big change on this.”

He added that politicians should also be pressurised to provide for prevention programmes targeting the communities where they would make the biggest difference. In Kenya 10% of infections are due to sex between men, yet few districts have provision for men who have sex with men (MSM). In districts in Russia where clean needles had been provided, the rise in HIV prevalence last decade was a tenth of the rise in districts where they had not.

If we could get the total cost down to about $300 a year we could treat twice as many people. Bill Gates, Microsoft founder

Correctly targeted interventions, including behavioural interventions that are properly focused and researched, might cut the global epidemic in half, Gates said.

“That would be good news but not good enough. Thankfully in the future we may have more tools.”

He referred to a mathematical model from the team at Imperial College in London, which showed that in a country with a generalised epidemic – the example being rural Zimbabwe – using properly-targeted prevention tools would cut the projected prevalence in the year 2031 by 38%. Adding in microbicides and pre-exposure prophylaxis would cut it by 53%.

In a country that still has a focused epidemic, like Benin, the impact would be larger: the model predicts that currently available prevention, efficiently targeted, would cut the 2031 prevalence by 46%, and adding in microbicides and PrEP would cut it by 64%.

However, he added, “We have to face that expanding our prevention efforts won’t start driving down the number of deaths and the number of people we have to treat for a decade. The only way we will reduce this now is to expand treatment.”

When funding is limited, he said, both the cost of the drugs and the cost of delivering them needed to go down.  Like Bill Clinton (see aidsmap article: Clinton: 'it's the end of the beginning' of the AIDS epidemic), he felt that the cost of first-line regimens was unlikely to go down a lot further, although there needed to be continued price pressure on the cost of both tenofovir and of second-line regimens, which now represented 25% of drug costs. Like Clinton, he thought the best savings would come from making economies of scale in distribution schemes and in task-shifting health personnel so that non-specialist help and drug delivery were provided by healthcare assistants.

“If we could get the total cost down to about $300 a year we could treat twice as many people,” he said.

Gates commented: “Other countries might need different interventions to achieve results, but the control of HIV would stand alongside the eradication of smallpox as one of the great medical interventions in history.”

The lawsuit brought by DOJ and HHS—United States v. Gilead—was a historic move lauded by many in the HIV and access to medicines movements. However, this lawsuit has yet to make any meaningful impact in the lives of patients living with and vulnerable to HIV.
PrEP4All
21 Jan 22
PrEP programmes & uptake

The new CDC guidelines have the potential to catalyze movement in these areas. They now acknowledge that many people can benefit from PrEP — not just those believed to be at high risk of HIV infection. The guidelines also recommend a far more inclusive approach to PrEP care.
STAT
20 Jan 22
HIV testing policies & guidelines

US: 2021 Was a Year of HIV Progress; Now Let’s Focus on PrEP Access

We must invest in PrEP in a similar way to how the community came together to enact and fund the Ryan White CARE Act in 1990. It is critical to address racial and ethnic disparities that continue to exist in new HIV diagnoses, and we cannot expect to end the HIV epidemic by 2030 without addressing this gap in services.
POZ
26 Dec 21
PrEP policies & guidelines