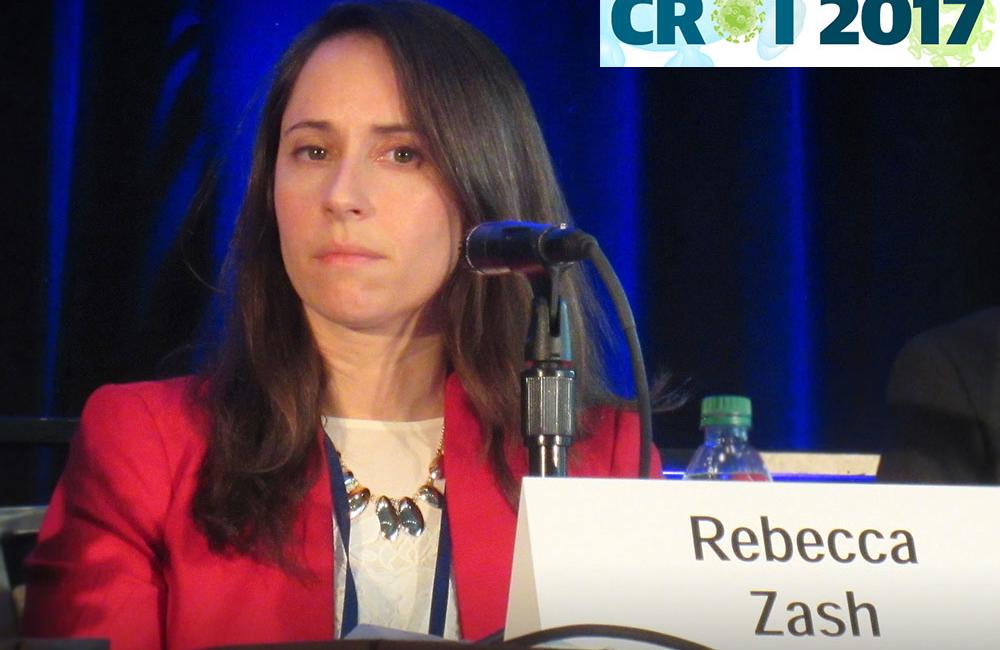 Infants exposed to an antiretroviral regimen of tenofovir, emtricitabine and efavirenz (Atripla) from conception experienced fewer adverse birth outcomes compared to other three-drug regimens, according to a study of births in Botswana between 2014 and 2016, presented on Tuesday at the 2017 Conference on Retroviruses and Opportunistic Infections (CROI) in Seattle.

The Tsepamo study, an observational analysis of approximately 45% of all births in Botswana from August 2014 to August 2016, provides important information on the safety of various regimens in common use in sub-Saharan Africa, Asia and Eastern Europe, where the vast majority of HIV-exposed infants are found.

“Our data for the first time show that there really could be differences [in birth outcomes] between regimens,” said Dr Rebecca Zash of Beth Israel Deaconess Medical Center, Boston, presenting the findings at a press conference.

Latin term meaning in the womb.

World Health Organization (WHO) guidelines recommend all individuals with HIV including pregnant and breastfeeding women start combination antiretroviral therapy (ART) regardless of clinical or immune status. After lengthy investigations of the possible harmful effects of efavirenz on the foetus, which found no increased risk of birth abnormalities in cohort studies, WHO recommended in 2013 that efavirenz-containing regimens should be provided regardless of pregnancy status.

A wide range of regimens remain in use and an increasing number of women start ART before pregnancy. Disconcertingly, there is still limited evidence about the severity and extent of the risks of foetal exposure, yet the benefits of ART clearly outweigh the risks. Previous studies have looked at risks associated with single agents rather than combinations, or have looked at the effect of ART exposure in comparison to no exposure.

A recent systematic review and meta-analysis covering the period from June 1980 to June 2016 regarding the timing of ART and adverse pregnancy outcomes included just eleven studies. Women who started ART before conception were significantly more likely to deliver preterm or very preterm or have low birth weight infants.

The aim of the Tsepamo study is to evaluate adverse birth outcomes with in utero exposure to different ART regimens, the first study of its kind. It is a planned two-year analysis of a four-year birth outcomes surveillance study.

WHO-recommended first-line regimen of tenofovir, emtricitabine and efavirenz (TDF/FTC/EFV) was compared with the other four most common ART regimens in Botswana, namely:

Botswana presents an ideal setting: it has a high HIV prevalence (22%), a 90% uptake of ART and over 95% of women deliver in health facilities. For the purpose of comparison, a variety of regimens are in use among women at the time of conception.

In 2012 Botswana moved from Option A (ZDV/3TC/NVP) to Option B (TDF/FTC/EFV). While dolutegravir was introduced in May 2016 for all adults and pregnant women, it is not captured in this interim analysis.

The study team abstracted data from all consecutive births at or above 24 weeks of gestational age at eight maternity wards in geographically diverse government hospitals in Botswana.

Outcomes included: stillbirth, preterm delivery (under 37 weeks), very preterm delivery (under 32 weeks), small for gestational age, very small for gestational age, neonatal death and two combined endpoints of any adverse outcome and severe birth outcomes. For a single birth the adjusted risk ratio (aRR) of each outcome was determined to evaluate the effect of HIV and ART exposures adjusting for maternal age, number of pregnancies and education.

The study population comprised 47,027 births, of which 11,932 were HIV-exposed and 5780 were in mothers taking ART at the time of conception:

Women on TDF/FTC/EFV tended to be younger, while those on ZDV/3TC/NVP had less education and were more likely to have had five or more prior pregnancies. All had relatively high CD4 cell counts ranging from 478 to over 600 cells/mm3.

Dr Zash concluded that expanded monitoring of pregnancy outcomes in different settings is needed especially as new antiretrovirals become available. Further research is needed to understand the mechanisms of adverse birth outcomes, notably in populations with high CD4 cell counts and where HIV is well controlled.

University of Oxford researchers assessed evidence from 34 studies, involving over 57,000 pregnant women with HIV, and found that protease inhibitor-based antiretroviral therapies significantly increased the risk of babies being small or very small for their gestational age, but there were no other adverse pregnancy outcomes, compared to therapies without protease inhibitors.
University of Oxford
13 Apr 22
More editors' picks