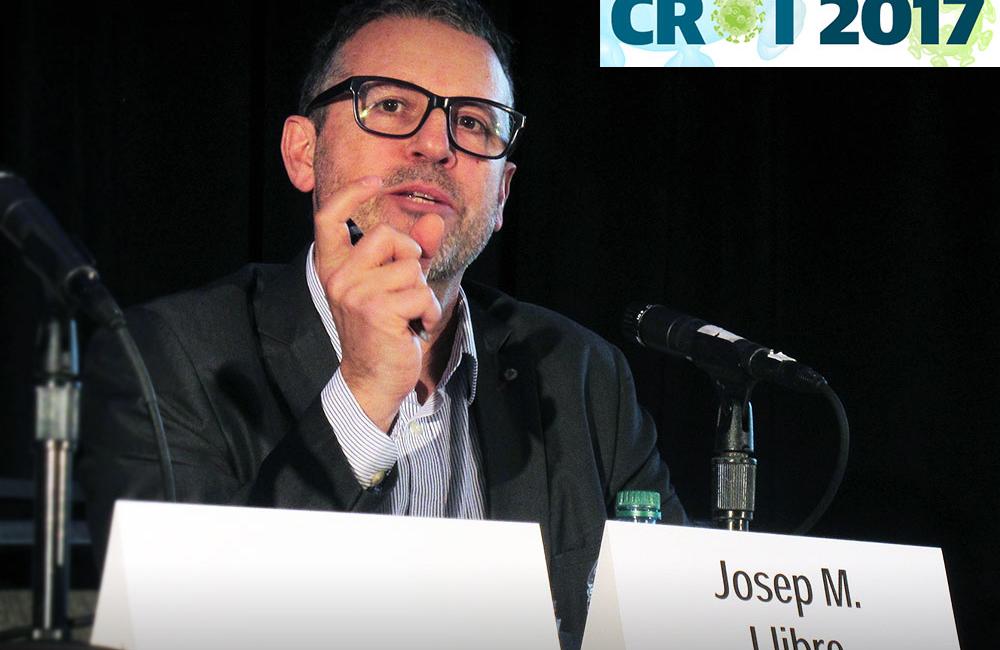 People who switched from standard antiretroviral therapy (ART) to a two-drug regimen of dolutegravir (Tivicay) plus rilpivirine (Edurant) were able to maintain an undetectable viral load for 48 weeks in a pair of late-stage clinical trials, according to a late-breaking report on Wednesday at the 2017 Conference on Retroviruses and Opportunistic Infections (CROI) in Seattle.

As long as people with HIV face the prospect of lifelong treatment, researchers will continue to look for antiretroviral regimens that are easier to take and more affordable, while remaining highly effective and well tolerated. If this can be accomplished with two instead of three or more drugs, treatment could be simpler and the cost could be lower. But simplifying therapy too much raises the risk of treatment failure and drug resistance.

"It's been a long-term dream to try to find safe strategies that can control the disease with a reduced number of drugs." Dr Josep Llibre

Josep Llibre of University Hospital Germans Trias in Barcelona presented findings from the SWORD-1 and -2 trials, which evaluated whether dolutegravir plus rilpivirine could maintain viral suppression in treatment-experienced people who switched from a three- or four-drug regimen with undetectable virus.

"It's been a long-term dream to try to find safe strategies that can control the disease with a reduced number of drugs," Dr Llibre said at a CROI press briefing.

ViiV Healthcare's dolutegravir is a potent integrase inhibitor with a high barrier to resistance, making it a good candidate for simplified therapy. Janssen's rilpivirine is a well-tolerated second-generation non-nucleoside reverse transcriptase inhibitor (NNRTI).

Prior studies suggested that this approach is feasible. As reported at the International AIDS Conference last July, the PADDLE pilot study showed that a dual regimen of dolutegravir plus the inexpensive nucleoside reverse transcriptase inhibitor (NRTI) lamivudine (3TC or Epivir) led to sustained undetectable viral load in most people starting ART for the first time (the phase 3 GEMINI trial is evaluating this regimen in a larger study). Another small study suggested that dolutegravir alone might be enough to maintain viral suppression in some highly treatment-experienced people. Previous studies looked at monotherapy or dual therapy using boosted protease inhibitors, but these agents have more side-effects and drug-drug interactions than integrase inhibitors.

SWORD-1 and SWORD-2 were identical multicentre randomised trials with enrolment from Europe, Russia, North and South America, and Asia. Together the studies included 1024 people with HIV who had been on standard ART with undetectable viral load (HIV RNA < 50 copies/ml) for at least a year – with a median of four years – and had no history of virological failure or evidence of drug resistance.

More than three-quarters were men, most were white, the median age was 43 years and the baseline CD4 T-cell count was approximately 600 cells/mm3. At study entry they were on regimens containing at least three drugs: an integrase inhibitor (20%), NNRTI (54%) or protease inhibitor (26%) plus two NRTIs; 73% used tenofovir disoproxil fumarate. People with chronic hepatitis B co-infection were excluded.

Participants in these open-label studies were randomly assigned (1:1) either to switch to the dual regimen of once-daily dolutegravir plus rilpivirine or to stay on their current regimen. The primary endpoint was continued undetectable viral load at 48 weeks.

Most participants in both treatment arms maintained viral suppression; 95% of people in the dolutegravir plus rilpivirine arm and 95% in the unchanged regimen arm had HIV RNA below 50 copies/ml at 48 weeks, showing that switching to the dual regimen was non-inferior to staying on standard therapy.

Virological failure was rare, < 1% in the dual therapy arm and 1% in the unchanged regimen arm. Among those who underwent viral sequencing, one person taking dolutegravir plus rilpivirine had a NNRTI resistance mutation, but no one in either arm had integrase resistance mutations.

Treatment was generally safe and well tolerated. No unexpected drug-related adverse events were reported. Serious adverse events were comparable in both arms, but discontinuations due to adverse events occurred more often in the dual therapy arm (3% vs < 1%). The most common adverse events were nasopharyngitis (inflammation of the nose and throat), headache, upper respiratory tract infections and diarrhoea. Although the frequency of more severe (grade 3-4) adverse events did not differ between the two arms, there were more mild to moderate (grade 1-2) events reported in the dolutegravir plus rilpivirine arm (17% vs 2%).

Joseph Eron of the University of North Carolina at Chapel Hill suggested at the press conference that this may reflect the fact that people who switch drugs often blame any symptoms on their new medications, while those who stay on the same treatment might not bother to report common minor symptoms such as headache or sore throat.

Switching to the dual regimen had a beneficial effect in terms of bone health biomarkers and a neutral effect on lipids, according to Dr Llibre. The former may be due to the fact that many people switched away from tenofovir DF, which is known to cause bone loss.

"This is the first time we can prove [a two-drug regimen] is non-inferior in a once-daily regimen with no booster, no protease inhibitor and no NRTIs." Dr Llibre said.

The SWORD studies are continuing through to 148 weeks. A new trial will assess a fixed-dose co-formulation of dolutegravir plus rilpivirine –  described as a very small pill – as once-daily single-tablet regimens are now the standard of care for a majority of people with HIV. This study will enrol some people with pre-existing drug resistance, to better reflect a 'real world' population.