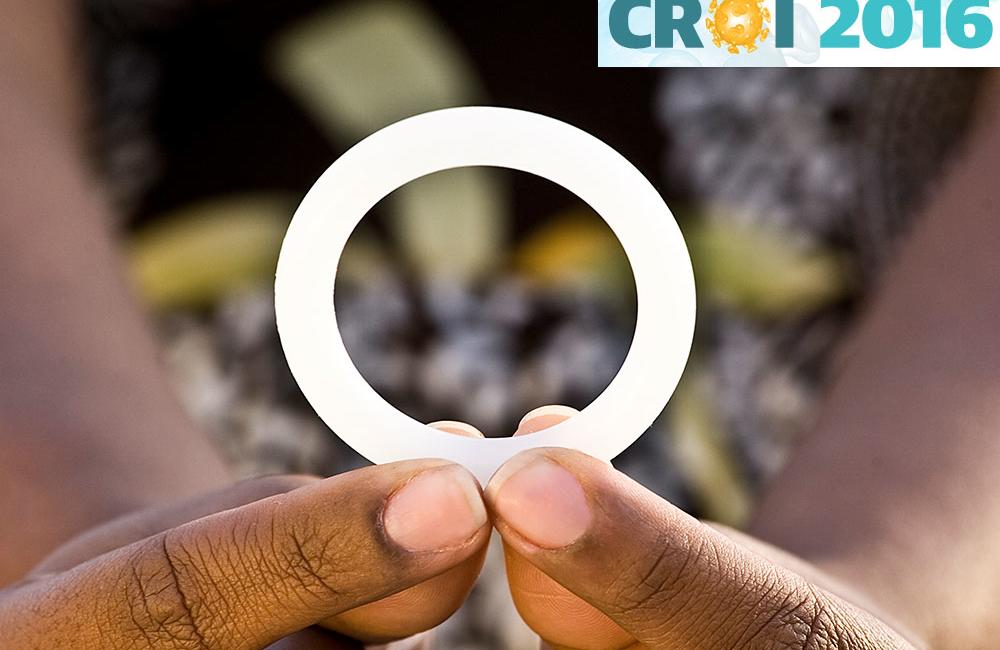 The results of two studies announced today at the annual Conference on Retroviruses and Opportunistic Infections (CROI 2016) in Boston, USA, show that vaginal rings impregnated with an anti-HIV drug are effective at cutting the HIV infection rate in women. However, the overall effectiveness seen was only moderate, preventing less than a third of infections – and the primary reason for this was that the rings had no effect at all in the youngest trial participants, aged 18-21 – who also had the highest rates of HIV infection. The rings were more effective in older women with almost two-thirds of infections prevented in women over 25 in ASPIRE.

The ASPIRE study was an important step towards determining whether the dapivirine ring could become one such option."

Researchers are still teasing out why the vaginal rings did not work for the youngest women. Some of the low effectiveness seen was undoubtedly due to poor adherence but drug level tests did not suggest adherence rates so low as to produce zero effectiveness. The results could be caused by a combination of intrinsic efficacy of less than 100% in the rings, intermittent use among participants, and greater vulnerability to HIV infection among young women.

Whether these are the reasons, or others for the relatively low levels of adherence and lack of effect seen in young women, remains to be seen. The same is true of whether these results will be enough for the ring to be licensed as a protection method.

The two studies, the ASPIRE study and the Ring study, jointly enrolled 4588 HIV-negative women aged 18-45 in 22 sites in South Africa, Uganda, Malawi and Zimbabwe. ASPIRE enrolled 2629 women at 15 sites and the Ring study 1959 at seven sites.

The findings from ASPIRE were published in the New England Journal of Medicine today. Only interim results from the Ring study were presented at a press conference today. Both studies will present fuller findings at CROI on Wednesday

Both studies had the same design: the women were given a silicone polymer ring designed to be worn inside the vagina for one month and then changed for another one. Half the rings were impregnated with 25 milligrams (mg) of a non-nucleoside reverse transcriptase inhibitor (NNRTI) anti-HIV drug called dapivirine, which was never licensed as an oral drug due to poor systemic absorption. Previous studies indicated that these rings should be able to deliver enough drug throughout a month to prevent HIV infection.

The vaginal-ring technology is not new, it is already used to deliver hormonal contraceptives, though in that case the rings are not worn during the period of menstruation.

Adherence has been shown to be the primary influence on whether oral pre-exposure prophylaxis (PrEP) and microbicides work, so the women in both trials were given regular drug-level tests. Dapivirine is to some extent systemically absorbed, and a dapivirine level in the blood of more than 95 picograms per millilitre (pg/ml) indicated that the ring had been in place for more than eight hours before the drug level measurement. However, this measure was only able to establish that the women wore the ring on the day of the blood test. So a year into ASPIRE, researchers also started measuring drug levels in returned rings: if there was less than 23.5mg of drug left in the ring after a month’s use – i.e. if at least 1.5mg had leached out – then the women were deemed to be adherent.

More details of ASPIRE participants are given in this aidsmap.com report from last year.

Nearly four in every hundred participants became pregnant per year (annual pregnancy incidence 3.95%). Women were suspended from the study while pregnant or breastfeeding.

There were 168 HIV infections among ASPIRE participants: 71 using dapirivine rings and 97 using placebo rings. This translates to an effectiveness of 27%, i.e. slightly more than one in four HIV infections that would otherwise have happened was prevented.

In women whose partners knew they were in the study, effectiveness was 44%, and in those whose partners did not know, it was 29% although this was not a statistically significant difference.

The drug level tests found dapivirine in 82% of blood samples, though as noted above all this meant was that the participant had used the ring that day. However in 84% of returned rings, drug levels indicated consistent if not constant use through the month. In nine per cent of samples, test results were discordant, with high levels of dapivirine in blood, but very little drug having left the ring – this might indicate ‘white coat dosing’ or women only inserting the ring on the day they went to the clinic.

Interestingly, there was no indication of decrease in adherence as time went on – rather the opposite. Adherence seemed to improve after the first month and also after the first year, and the difference in infection rates between dapivirine and placebo arms only became apparent in most age groups after a year. This seems to be a technology that women have to get used to.

The Ring researchers also gave a figure for the HIV incidence rates among women in the placebo arms of both studies. It was 8.2% a year in women under 21, 37% in women aged 21-25 and 43% in women aged over 25, again showing that it is young women under 21 who are in greatest need of a prevention method that can truly protect them.

Next steps and comments

The Ring researchers said that despite the fact that only moderate effectiveness was demonstrated, plans were underway for a follow-up open-label study for Ring participants, and possibly ASPIRE participants too, starting in April 2016. The rationale of this is that in some PrEP studies, adherence and effectiveness have been higher in participants when they know they are all using the active drug. If results are promising, then there would be an application for a product licence from early 2017.

Dr Zeda Rosenberg, founding Chief Executive Officer of IPM, said: “IPM will seek regulatory approval for the monthly dapivirine ring and work with partners to determine its role in strengthening HIV prevention efforts. We are also hopeful we can learn more about how to help women who want to use the ring do so consistently. A follow-on study would help answer key questions about how women could use the ring when they are aware it can safely offer protection.”

Dr Jared Baeten, who co-led the ASPIRE study, said: “Women – especially in sub-Saharan Africa – need multiple options for HIV prevention. The ASPIRE study was an important step towards determining whether the dapivirine ring could become one such option.”

Dr Anthony Fauci, Director of the National Institute of Allergies and Infectious Diseases, primary funder of the ASPIRE study, said: “Women need a discreet, long-acting form of HIV prevention that they control and want to use. This ring confers partial protection, [but]… further research is needed to understand the age-related disparities in the observed level of protection.”

Questions to be answered

Why were the results of these studies relatively disappointing? Firstly, the ring technology probably does not have the same intrinsic efficacy as oral PrEP; one researcher told aidsmap.com that 100% adherence probably implied an efficacy of about 70%.

Secondly, however, it has become clear from qualitative studies that what women might like in a vaginal ring was not necessarily on offer from these particular ones. A recent study investigated the characteristics thought more and less desirable by women who used contraceptive rings and found women would prefer a ring that was a little more pliable and thinner than the HIV prevention one.

In addition, women preferred to be able to take the rings out and clean them, did not like wearing them during menstruation, and some preferred to take them out even during sex (which might not inevitably mean loss of efficacy as long as they were immediately replaced). This was also the case in a previous acceptability trial of another HIV ring. While women were reassured about safety, some participants could not rid themselves of the feeling that retaining the ring felt ‘dirty’, especially during their menstrual period, and they remained aware of wearing it, rather than forgetting it was there except when it needed to be changed.

Whether any of these are the reasons or others (such as fear of discovery, or inconvenience) for the relatively low levels of adherence and lack of effect seen in young women remains to be seen.

The same is true of whether these results or the ones from an open-label trial will be enough for the ring to be licensed as a protection method in addition to oral PrEP, which South Africa has already licensed.

You can view a webcast of the press conference including information on these studies on the conference website.