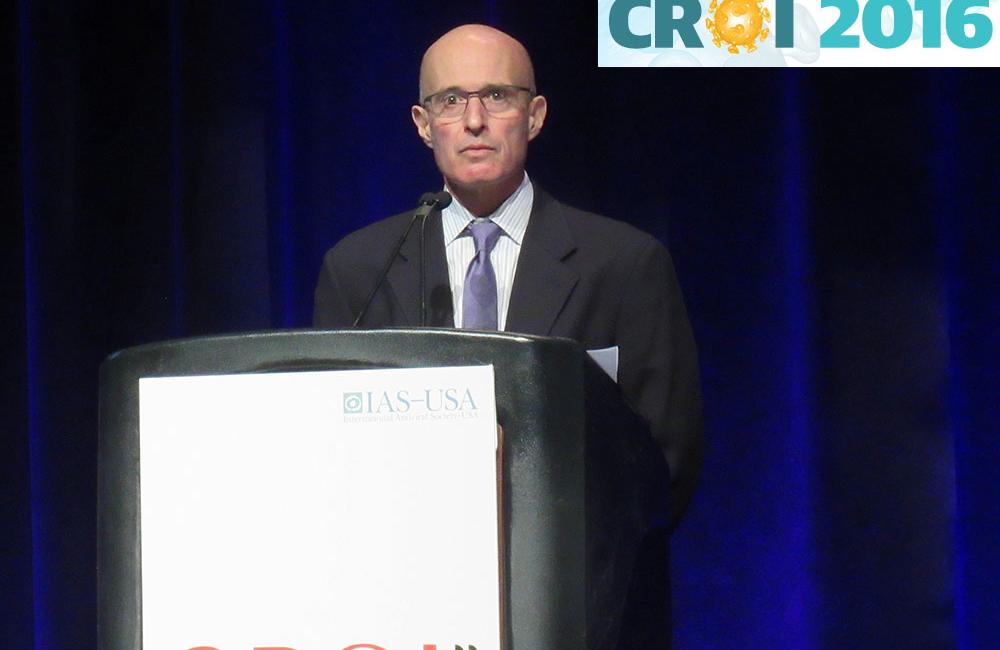 The Conference on Retroviruses and Opportunistic Infections (CROI 2016) heard results yesterday from the first phase 2 (safety, acceptability and dose-finding) study of a long-lasting, injectable formulation of the integrase-inhibitor drug cabotegravir for use as pre-exposure prophylaxis (PrEP) in HIV-negative people.

The previous day the conference had heard a presentation of a study of the same injectable drug, plus another injectable drug, rilpivirine, used as treatment for people with HIV – see this report.

In the cabotegravir PrEP study, dubbed the ECLAIR study, a couple of surprises awaited the researchers. Firstly, the rate of absorption of the drug into the body was faster than expected, meaning that an injection will probably have to be given every eight weeks, instead of every 12 weeks as hoped. Secondly, the duration and severity of pain and other effects of the injections were greater than expected; however few people dropped out of the study because of them, and three-quarters of participants said they would be happy to continue taking cabotegravir injections as PrEP should it become available.

The lowest point to which levels of a drug fall in the blood between doses.

The ECLAIR study lasted for 81 weeks altogether: presenter Martin Markowitz did not present final results as the final, follow-up phase has just finished. For the first four weeks, subjects took a daily oral cabotegravir pill (or a placebo pill – one in five subjects took the placebo). This oral phase was intended as a precaution to weed out any subjects who have unusual adverse reactions to cabotegravir – since one of the problems of an injectable formulation is that is cannot be suddenly stopped.

At weeks five, 17 and 29, three doses of injectable cabotegravir were given. These consisted of 800 milligrams of cabotegravir given as two two-millilitre injections, one in each buttock, or of saline as placebo. The ‘injection phase’ was defined as lasting till week 41, 12 weeks after the last injection. There was then a follow-up phase of 40 weeks till week 81; not all the data has yet been collected from this phase.

The study population consisted of men aged between 18 and 64 defined as being at low risk of HIV infection (as this is largely a safety, not a prevention trial). Their average age was 30.5 years, 57% were white and 32% African-American, and roughly 80% were gay and 20% heterosexual.

One hundred and twenty-six men entered the trial, 105 allocated to cabotegravir and 21 to placebo.

During the first four weeks on the oral pill, eleven people withdrew from the study who were taking cabotegravir, and one taking placebo. During the injection period, a further seven people, all on cabotegravir, withdrew, four of them due to intolerance of the injections. The fact that more people withdrew in the oral phase was attributed by Dr Markowitz as being due to caution on the part of the investigators at ensuring that no-one who showed any possibility of side-effects went forward to the injection phase. In particular, three subjects in the oral phase saw an increase in levels of creatine phosphokinase, an enzyme that indicates injury to muscle tissue, and although these were almost certainly not drug-related, they were withdrawn from receiving an intramuscular injection as a precaution.

Despite this, 62% of people on cabotegravir said they were satisfied with their study medication, and 74% said they would be happy to continue receiving it. In fact more people said they preferred the 12-weekly injection to having to take a daily tablet.

A model had forecast that the peak level in blood would be three micrograms per millilitre (mcg/ml) when in fact the average level was 5-6 mcg/ml, and the average trough level would be 1 mcg/ml when in fact it was 0.3-0 0.6 mcg/ml. This is of concern since it is close to the IC90, the level of drug that cuts 90% of viral replication, and drug levels should be well above this to ensure efficacy. The proportion of trial subjects whose trough drug levels fell below the IC90 was 24% after the first injection, 31% after the second and 15% after the third.

Dr Markowitz said that the reason for the faster absorption was unknown but it would probably mean that cabotegravir PrEP would have to be given every two months rather than every three.

There were two cases of HIV infection in the study. One person receiving placebo tested HIV positive at week 23. The other had received cabotegravir, but tested positive at week 53, nearly six months after his last cabotegravir injection. At this point he still tested HIV-antibody negatice but had a viral load of over three million copies/ml, so it must have been a very recent infection. He had no detectable cabotegravir in is bloodstream at this point.

Dr Markowitz concluded that these results indicated that cabotegravir injections were safe and, despite injection site reactions, relatively well-tolerated. A parallel trial is happening in women and when this has concluded the final decision will be taken about taking injectable cabotegravir PrEP forward into a fully-fledged effectiveness trial, where it would be compared with oral tenofovir/emtricitabine (Truvada).