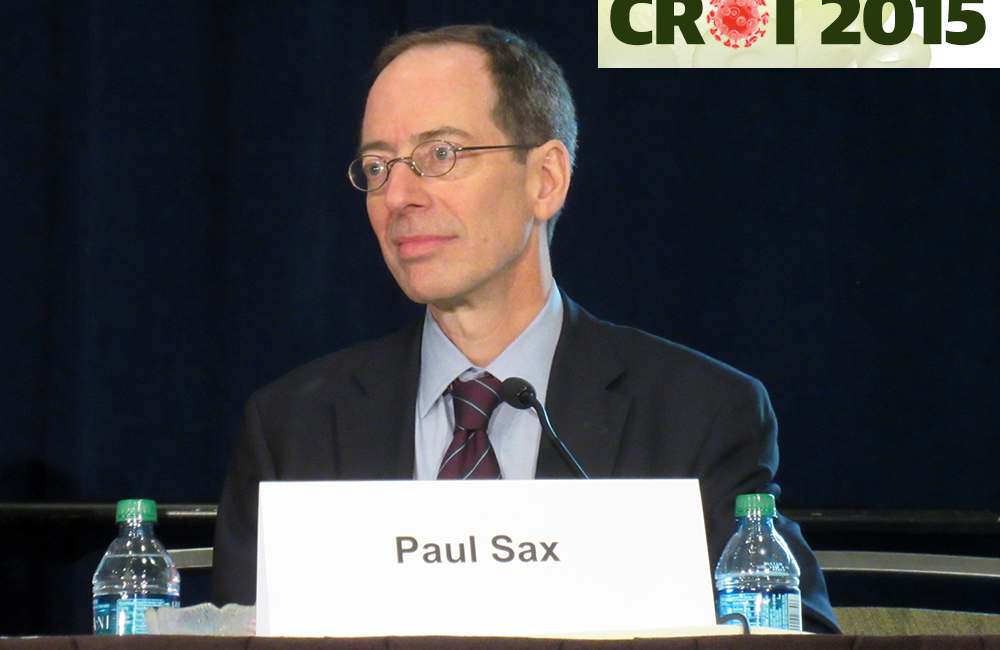 Paul Sax presenting at CROI 2015. Photo by Liz Highleyman, hivandhepatitis.com
This article is more than 7 years old. Click here for more recent articles on this topic

Tenofovir alafenamide (TAF), a new formulation that has lower concentrations in the blood but reaches higher levels in cells, is as effective as the older version, tenofovir disoproxil fumarate (TDF), according to a report at the Conference on Retroviruses and Opportunistic Infections (CROI 2015) taking place this week in Seattle, USA. A second study showed that TAF has less detrimental effects on the kidneys and bones compared with TDF. TAF has been submitted for approval in Europe and the US.

Gilead Sciences' tenofovir disoproxil fumarate (Viread) is one of the most widely used antiretroviral drugs. It is a component of the Truvada coformulation – used for both HIV treatment and pre-exposure prophylaxis (PrEP) – and of the single-tablet regimens Atripla, Eviplera/Complera and Stribild. TDF is highly potent and generally safe and well-tolerated, but it can cause kidney and bone toxicity in some patients.

TAF is a new pro-drug that delivers the active agent, tenofovir diphosphate, more efficiently to cells infected with HIV. TAF produces adequate intracellular levels with lower doses, which means lower concentrations in the blood plasma and less drug exposure for the kidneys, bones and other organs and tissues. A phase 2 clinical trial previously showed that a regimen of TAF plus emtricitabine, elvitegravir and cobicistat was comparable to TDF/emtricitabine/elvitegravir/cobicistat (Stribild) but caused less kidney impairment and bone loss.

Whereas cheaper, generic versions of tenofovir disoproxil fumarate will be available in many Western markets soon, TAF will be a new product exclusive to Gilead and protected by patent.

David Wohl from the University of North Carolina presented combined primary results from two phase 3 studies (GS-US-292-0104 and GS-US-292-0111) looking at the antiviral activity and overall safety of TAF in a new single-tablet regimen. Paul Sax from Brigham and Women's Hospital in Boston followed the next day with data on TAF's effects on kidneys, bones and lipids.

Study 104 and Study 111 were randomized controlled trials conducted in Europe (both), North America (both), Latin America (Study 111) and Asia (Study 104). Together they included 1733 previously untreated participants with similar characteristics in both trials.

Most (85%) were men, one-quarter were black, 19% were Hispanic/Latino and the median age was 34 years. They had well-controlled HIV disease with a median viral load of 4.58 log10 copies/ml and a median CD4 cell counts of approximately 400 cells/mm3. They had normal kidney function at baseline with a median estimated glomerular filtration rate (eGFR) of approximately 115 ml/min.

Participants were randomly assigned to receive a once-daily single-tablet regimen containing emtricitabine, elvitegravir and cobicistat with either 10mg TAF or 300mg TDF. The primary analysis was done at week 48 of treatment.

Viral suppression rates for the TAF and TDF regimens were similar regardless of whether participants had high or low baseline viral load, CD4 counts above or below 200 cells/mm3, male or female sex, black or non-black race/ethnicity and age over or under 50 years.

In both studies, 4% of participants experienced virological failure. Among the small number (about 2%) who met the criteria for resistance testing, very few in either arm showed evidence of any primary resistance mutations (0.8% with TAF, 0.6% with TDF).

Treatment was generally safe and well-tolerated. Dr Wohl presented overall drug safety profiles, which were similar in both arms. There were 45 patients (5%) in the TAF arm and 71 (8%) in the TDF arm who discontinued treatment early, including 8 and 13 people, respectively, who did so due to adverse events.

About 40% of participants overall experienced drug-related adverse events, mostly mild-to-moderate. The most common side-effects were diarrhoea (18%), nausea (16%) and headache, all occurring with similar frequency in both groups. In both the TAF and TDF arms there were few serious adverse events (8% vs 7%) or drug discontinuation for this reason (0.9% vs 1.5%); 20% experienced grade 3 or 4 laboratory abnormalities in both groups.

"Nothing stood out" in terms of adverse events association with TAF that have not already been seen with TDF, Wohl said.

A pharmacokinetic analysis confirmed that TAF produced lower plasma levels of tenofovir than TDF, but intracellular levels were fourfold higher with TAF. The steady-state tenofovir concentration was 91% lower with TAF compared to TDF.

Looking at kidney-related side-effects, eGFR decreased – indicating worsening function – by -6.6% in the TAF arm and by -11.2% in the TDF arm by week 48. The change occurred during the first few weeks of treatment and then stabilised.

In the TAF arm there were no kidney-related adverse events leading to treatment discontinuation. Three people had hypophosphataemia and two had protein in their urine. In the TDF arm, there were four kidney-related discontinuations: two cases of kidney failure, one person with decreased eGFR and one with nephropathy. In addition, one patient had subclinical tubulopathy, four had hypophosphataemia, and two each had glucose and protein in their urine. No one in either arm, however, had overt tubulopathy or Fanconi syndrome.

Turning to bone effects, DEXA measurements were done at baseline and at weeks 24 and 48. People taking TAF experienced smaller average decreases in bone mineral density at 48 weeks than people taking TDF at both the spine (-1.30 vs -2.86) and the hip (-0.66 vs -2.95). Spinal bone loss started soon after starting treatment, reaching a plateau at 24 weeks. Hip bone mineral density continued to fall through week 48, but much more steeply in the TDF arm.

However, not everyone experienced bone loss. In the TAF group, 26% had spine bone loss and 17% had hip bone loss of at least 3%. Bone loss occurred more often in the TDF arm, with 45% and 50% having at least a 3% decrease at the spine and hip, respectively. A small proportion of participants actually gained bone density: 7% at both the spine and hip in the TAF arm, and 3% at both sites in the TDF arm.

Finally, researchers looked at blood lipid levels, which are known to play a role in cardiovascular disease. Levels of total, LDL (‘bad’) and HDL (‘good’) cholesterol, as well as triglycerides, rose by small amounts across the board, but more so in the TAF arm; total-to-HDL cholesterol ratio stayed about the same.

Dr Sax suggested that the lipid differences might be occurring because tenofovir reduces lipid levels, but the lower concentration produced by TAF does so less compared with TDF.

Dr Wohl’s team concluded that the TAF and TDF coformulations led to “high and similar response rates, irrespective of age, sex, race, HIV-1 RNA and CD4 cell count,” with “low rates of virological failure, with resistance <1% in both arms.”

“Efficacy was very comparable and clearly TAF held its own against TDF,” Dr Wohl said at a CROI press conference. “This is very reassuring data as we think about TAF as a component of antiretroviral therapy.”

Sax explained at the press conference that while the long-term clinical effects are not yet known, this analysis “strongly suggests [TAF] will be safer in the long run for the kidneys and bones than TDF.”

Based on these favourable findings, Gilead has submitted the TAF coformulation for regulatory review in Europe and the US. The US Food and Drug Administration (FDA) is expected to make a decision by November 2015.

Stand-alone TAF is also being developed as a treatment for hepatitis B virus (HBV) infection. In addition, the company is developing a dual coformulation of TAF and emtricitabine, which will be the successor to Truvada.

Asked about the role of TAF as pre-exposure prophylaxis (PrEP) for HIV prevention, Marshall Fordyce from Gilead said at the press conference that the company is collaborating with the US Centers for Disease Control and Prevention (CDC) on a study of emtricitabine and TAF for PrEP in macaque monkeys. Fordyce noted that the TAF combination “will have the same development pathway” as TDF for PrEP, presumably suggesting that Gilead will not conduct PrEP studies itself. “To reproduce iPrEx [with the new formulation] would be a large undertaking,” he stated.

One of the biggest updates was the inclusion of long-acting, injectable cabotegravir and rilpivirine (Cabenuva, ViiV Healthcare/Janssen), after the FDA changed the indication to include children and adolescents 12 years of age and older and weighing at least 35 kg.
Infectious Disease Special Edition
18 May 22
The search for a cure

There’s a dearth of research about the effectiveness of cancer treatment in people with HIV. In order to fill this gap, a team of researchers evaluated the efficacy of a chemotherapy regimen commonly used to treat advanced cancer in a group of patients living with HIV.
Oncology Nurse Advisor
16 May 22
Treatment guidelines

The overall purpose of these guidelines is to provide guidance on best clinical practice for antiretroviral therapy (ART) and management of adults living with HIV. The consultation will be open for 1 month until 5.00pm on Thursday 9 June 2022.
British HIV Association (BHIVA)
10 May 22
More editors' picks