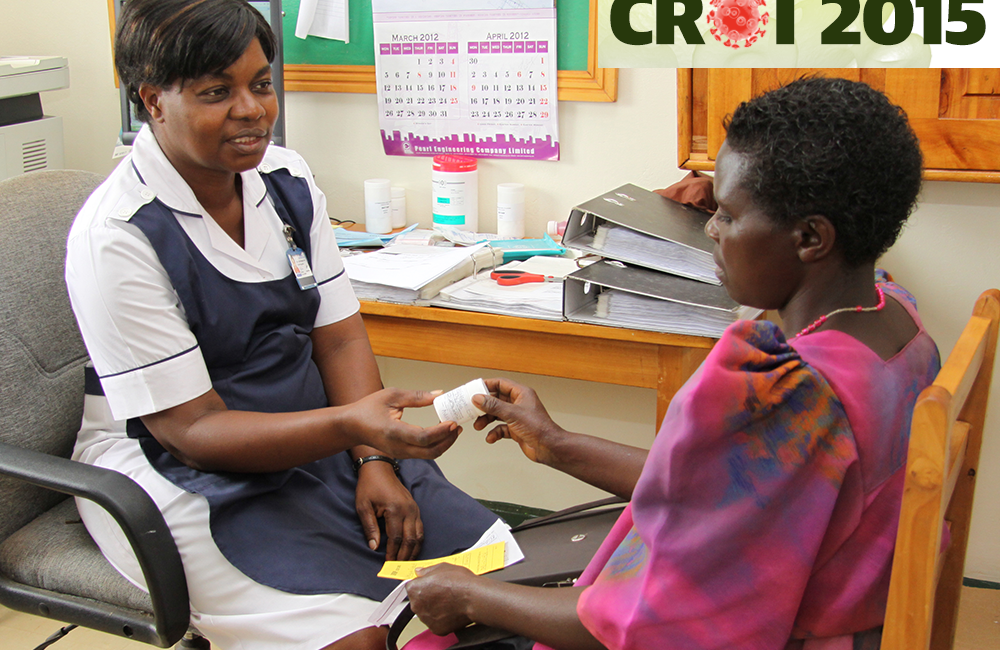 A study nurse counsellor counselling a participant on study product. Image by MRC/UVRI Uganda Research Unit on AIDS.
This article is more than 8 years old. Click here for more recent articles on this topic

Stopping cotrimoxazole prophylaxis increases the risk of serious bacterial infections and malaria, even at high CD4 cell counts, in people taking antiretroviral therapy in Uganda, results of a randomised trial show. The results were presented on Wednesday at the Conference on Retroviruses and Opportunistic Infections (CROI 2015) in Seattle, USA, by Professor Jonathan Levin of the UK’s Medical Research Council.

Cotrimoxazole prophylaxis is recommended for all adults with HIV with CD4 cell counts below 350 and for all with symptomatic HIV disease (WHO stages 3 or 4) regardless of CD4 cell count. Updated WHO guidance issued in December 2014 recommended that cotrimoxazole prophylaxis could be stopped in adults taking antiretroviral therapy if virally suppressed and showing evidence of immune recovery. However, the guidelines noted that the quality of the evidence to support this conditional recommendation was low.

But in settings where bacterial infections and malaria are prevalent, cotrimoxazole prophylaxis can be continued regardless of CD4 cell count, the guidelines state.

Long-term cotrimoxazole treatment increases the pill burden for people taking antiretroviral therapy, which may compromise adherence, and may also cause toxicity such as neutropenia (low levels of white blood cells called neutrophils which fight off bacterial and fungal infections). It is also an additional burden for pharmacies to manage cotrimoxazole stocks, and the additional benefit for disease prevention in people on stable antiretroviral therapy in settings with a high burden of bacterial infections is unclear.

In order to answer these questions, the Medical Research Council designed a study to test whether it is safe to stop cotrimoxazole prophylaxis in a setting with a high frequency of infections that are prevented by cotrimoxazole.

The COSTOP study randomised adults on antiretroviral therapy with CD4 cell counts above 250 cells/mm3 to continue cotrimoxazole prophylaxis or receive a placebo. The study was blinded to investigators and participants. Ninety-three per cent of participants were followed for at least one year.

The study enrolled 2180 participants at two sites in rural Uganda. Participants had a median CD4 count of 518 cells/mm3 and had completed a median of four years of antiretroviral treatment.

The primary endpoints of the study were the time to death or the first clinical event that was preventable by cotrimoxazole, and grade 3 and 4 haematological adverse events.

The study assessed efficacy by intent-to-treat analysis and by a per-protocol analysis in which participants were evaluable if they had taken at least 80% of their pills for each period between study visits.

Malaria was significantly less frequent in those who received cotrimoxazole (4.1 vs 13.9 cases per 100 person years, aHR 3.43, 95% CI 2.69-4.38). Hospitalisation was also more frequent in the placebo group, especially for malaria.

Cotrimoxazole recipients had significantly lower CD4 cell counts (469 vs 495 cells/mm3) and were more likely to experience no increase in CD4 cell count during the first 48 weeks of the study.