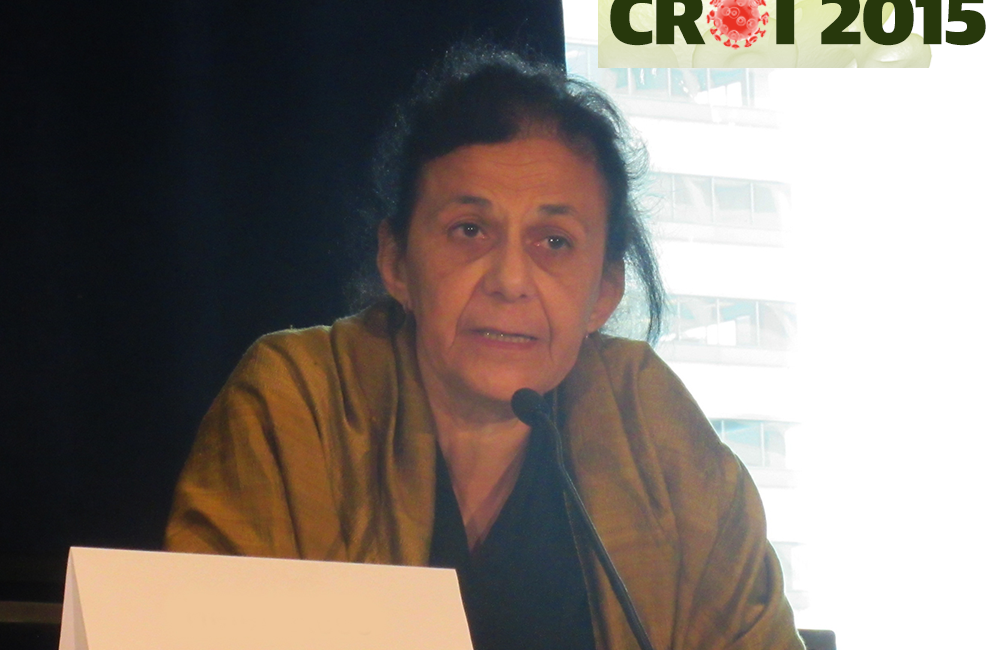 Waafa El Sadr at CROI 2015. Photo by Liz Highleyman, hivandhepatitis.com
This article is more than 8 years old. Click here for more recent articles on this topic

A US study which offered patients gift cards to present themselves for HIV care after testing, and also to stay in care and maintain an undetectable viral load, did not succeed in its main aims and with most patients. Rates of linkage to care, retention in care and viral suppression were not significantly higher in centres where patients received gift cards than in ones where they did not. The research was presented to the Conference on Retroviruses and Opportunistic Infections (CROI 2015) in Seattle, USA.

However, the study did produce some improvement in the proportion of people who remained in care. And it improved viral suppression rates in smaller and under-performing centres.

Presenter Wafaa el-Sadr, Director of HIV at Columbia University’s School of Public Health in New York, said that financial incentives have a potential role in treatment as prevention in specific locations and populations.

The HPTN 065 study presented qualitative findings at the HIV Research for Prevention Conference last October, in Cape Town, South Africa. After some initial misgivings, both patients and staff found the gift-card scheme acceptable and in the case of the patients useful; many were poor and spent the gift cards on necessities.

The study operated at 34 HIV testing sites and 37 care sites (many co-located) in the Bronx, New York and in Washington DC. Thirty-two sites were based in hospitals and 39 in community resources. It ran from January 2011 to March 2013, with a period of maximum activity in the last three months of 2012.

The sites were randomised either to offer standard of care or to offer patients:

The number of people who tested HIV positive and were eligible for the testing and linkage to care component was 1109 (average per site: 33) and 1061 actually received gift cards, of which 80% were redeemed. There were roughly twice as many people who were referred to care in Washington DC as in the Bronx.

The number of patients eligible for the viral load component was 19,185, with slightly more in the Bronx than DC, and 9641 (average per site: 438) of these were on antiretroviral therapy and eligible for the $70 gift cards. These patients made a total of 49,650 visits, and 39,359 gift cards were dispensed (79% of visits), with relatively more dispensed in the Bronx. Eighty-four per cent were redeemed. The make-up of the patient group was similar to the linkage-to-care group, except that rather fewer in the Bronx were male and gay.

The headline news of the study was that the cards made no statistically significant difference to the proportion of people presenting for care within three months, nor to the proportion who were virally suppressed.

There was, however, a significant increase of 8.1% (p = 0.005) in the proportion of patients in regular care, when this was defined as the proportion who attended at least four out of the last five quarterly visits. There was also a significant though modest rise of 5.4% in the proportion virally suppressed in the three months October to December 2012 – the period that saw the largest number of gift cards handed out.

In the linkage-to-care component, it was notable that the four sites that had had the poorest rate of linking patients to care, with baseline linkage rates of 20 to 50%, greatly improved their performance, three to getting 100% of patients linked and one to  90%. However, these were all small centres that did not contribute much to the average figure.

The same phenomenon was observed with the viral-suppression cards. The most poorly performing clinics – defined as those with fewer than two-thirds of their patients with undetectable viral loads at baseline – saw the biggest improvement, with a 10.4% rise in the proportion of patients virally suppressed, and a 13.2% rise during the ‘peak period’.

The most poorly performing clinics were also in general the smallest ones (defined as serving fewer than the mean level of 186 patients) and the financial incentive produced a significant rise of 11.4% virally supressed during the peak period.

Wafaa El-Sadr commented that the reason these small centres were less successful was not generally due to physician experience but more often because they had fewer resources such as the staff to follow-up patients who dropped out of care.

Where cash incentives do work

In a separate presentation at the conference, David Wilson of the World Bank reviewed three studies in Africa where offering young people cash incentives to stay free of sexually transmitted infections (STIs) or HIV, or to reduce their sexual risk behaviour, had worked.

In a study in Tanzania, young people offered US$60 a year to stay STI-free had 25% fewer STIs.

In Lesotho, adolescent girls offered $50 or $100 tickets for the national lottery – i.e. just the promise of a prize, not actual cash – had 33% lower HIV incidence, or 39% in girls offered the $100 tickets. It made no difference in boys, however. See this report.

In Malawi, young women were paid $15 per month to stay in school. As well as 35% fewer dropping out of school, girls offered the $15 had 60% lower HIV prevalence and 76% lower HSV-2 (genital herpes) prevalence, were 33% less likely to have sex and 30% less likely to get pregnant. They not only had less sex but when they did, chose partners less likely to have HIV and closer to their age range. Further research showed that girls with older boyfriends received an average of $6.50 a month – quite a lot in a country where per-capita GDP is $287.50. Essentially, the $15-a-month scheme was able to outprice the going rate.

Other schemes not mentioned by Wilson from Kenya and South Africa in orphans have also been successful.

In contrast, the conference also heard this year that the considerable investment US PEPFAR funding had made in abstinence-only programmes had made no measurable difference to sexual risk behaviour – see this report.