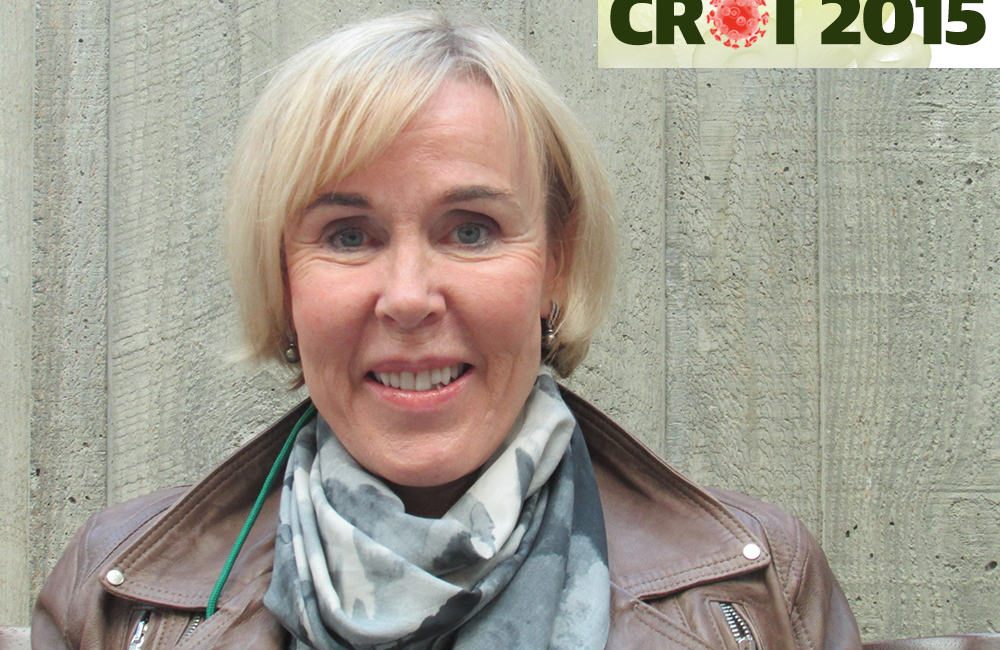 Helen Rees at CROI 2015. Photo by Gus Cairns (aidsmap.com).
This article is more than 8 years old. Click here for more recent articles on this topic

Among some highly promising results from HIV prevention studies presented at the Conference on Retroviruses and Opportunistic Infections (CROI 2015) in Seattle, USA, today, there was one disappointment. FACTS 001, a study testing the efficacy against HIV of a vaginal microbicide gel containing tenofovir, produced a null result: there was no difference in the HIV infection rate in young women given the gel and the rate in young women given a placebo gel.

Among the 2029 women in the study allocated to either tenofovir or placebo gel, there were 61 infections in women using tenofovir gel and 62 in women using placebo. This was equivalent to an annual incidence rate of 4% (close to the 3.5% the researchers anticipated).

FACTS 001 was designed to be the follow-on study to CAPRISA 004, the study which in 2010 raised so many hopes by reporting an effectiveness of 39% for the same tenofovir-gel microbicide.

There have been other vaginal microbicide studies since, including one arm of the VOICE study, which was underway when CAPRISA 004 reported its result, and which reported a null result itself in March 2013.

VOICE, however, was not directly comparable to CAPRISA 004. In VOICE, the gel was to be used daily, regardless of whether women had sex or not. In CAPRISA 004, women were instructed to use the gel once before and once after having sex – which could include several acts of intercourse – with no more than two doses in 24 hours. South African investigators wondered whether CAPRISA had worked because women found event-driven use easier than daily use.

“When CAPRISA finished”, FACTS 001 lead investigator Helen Rees told Aidsmap, “We were faced with a decision. Should we proceed straight to apply for a licence for the gel? This, we felt, was unlikely to succeed. Should we do nothing and wait for VOICE? No, because CAPRISA might have worked because it was event-driven. But CAPRISA was quite a small study in only two sites, one with untypically high incidence. We wanted to see if a microbicide would work in a wider variety of sites.”

Accordingly, FACTS 001 was set up in nine sites in South Africa to evaluate the same before-and-after microbicide-gel regimen. In CAPRISA 004, women aged 18-35 were eligible: FACTS, wanting to concentrate on young women, the most vulnerable group, reduced the maximum age to 30 and in fact the average age of participants was 23, making this the youngest population to be studied in an HIV prevention efficacy trial.

Few were married (only 12%), most were poor and unemployed (73% had earned less than $US100 in the last three months) and, importantly, 62% lived with their parents: these young women had little private space and, as Rees commented, “had to have sex away from home.” At baseline, one-third said they used condoms consistently in the last four weeks and 42% had genital herpes (HSV2), a well-known co-factor for HIV infection.

Retention was good with only 7.4% of participants lost to follow-up.

Adherence by self-report and returned applicators was in the region of 50-60% throughout the study.

Was this adherence figure to be relied on? One of the most striking findings from two previous studies in young women in Africa – FEM-PrEP and VOICE – was the large disparity between reported and actual adherence. For many reasons, women in those trials felt they had to conceal low adherence partly because they actually valued many of the other positive aspects of being in the trial.

In FACTS 001, there was no such disparity. The drug-level tests showed that 64% of samples contained enough tenofovir to prove that women had used the gel in the previous ten days. Two-thirds of women in the drug-level sub-study had tenofovir detected at some of their quarterly visits and only 13% at none of their visits. “Most of the women tried to use the gel,” commented Rees.

Rees commented that both adherence and the concordance of reported and actual adherence was better in FACTS 001 because they had put so much effort into providing support and education for trial participants.

“We had FACTS clubs where women organised everything from workshops talking about experiences of sexual violence to dance contests. Many of the young women told us that an important beneficial side-effect of the study was that for the first time, as young, unemployed women, they were doing something that mattered.”

However, the drug-level tests only found tenofovir in all samples in 22% of women. And, as the result showed, this was not enough to reduce the women’s risk of HIV.

This was echoed by the self-report and applicator returns. In CAPRISA 004, enhanced HIV protection was seen in the subset of women who had more than 80% adherence. In FACTS 001, however, only 13% of participants had this degree of adherence.

Among women who did report high adherence, the gel worked. There were 57% fewer infections in the 13% of women who reported more than 80% use of gel during sex – and even in the 20% of women with more than 72% adherence.

Similarly, the HIV infection rate was 52% lower in women whose drug-level samples indicated that they had used gel during sex in the previous ten days.

FACTS 001 has shown us three things. Firstly, this study, CAPRISA 004 and, to some extent VOICE have all shown that tenofovir-containing microbicide gel does have efficacy in women who are able to use it for most sex acts.

Secondly, it shows that a strong community support and educational programme can overcome barriers of trust between researchers and participants.

Thirdly however, it shows that despite this, the microbicide was not efficacious enough to overcome the barriers to adherence posed by the participants’ lifestyles and especially their youth. The young women reported trying to use the gel but simply forgetting to take it when they went out or not being in a position to use it. Qualitative interviews with the participants are ongoing and will be presented, probably later this year.

“It may be that this method of prevention is simply not suitable for young women,” Rees told Aidsmap. “There is a parallel with contraception: young women may prefer condoms for the kind of one-off sex they have and may move to more permanent methods when married or after one child – injectables, implants and so on. “

Site co-ordinator Sinéad Delany-Moretlwe wondered if an oral pill “that you can just habituate” might work better with young women given enough support. In truth though, as studies of PrEP in young gay men and of HIV treatment in teenagers also show, young people may always pose the most difficult challenge when it comes to adherence.