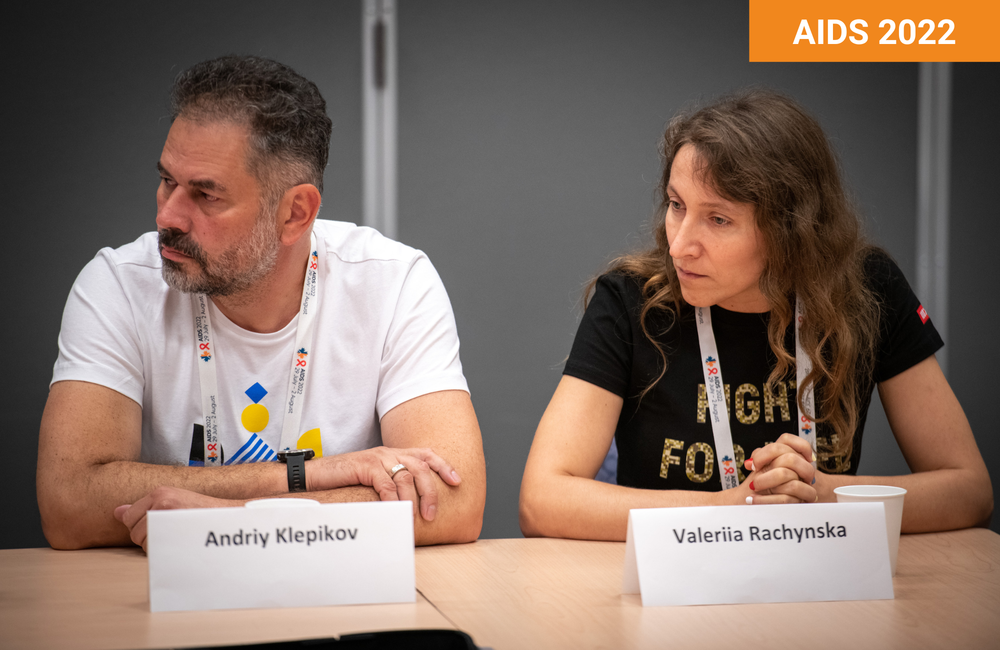 Andriy Klepikov from the Alliance for Public Health and Valeriia Rachynska from 100% Life at AIDS 2022. Photo ©Steve Forrest/Workers’ Photos/IAS.

Despite the devastating impact of the Russian invasion, many people remaining in Ukraine have been able to continue to receive HIV, TB and drug dependency services with limited disruptions, the 24th International AIDS Conference (AIDS 2022) was told earlier this month. The community response to maintain HIV and other health services has been nothing short of heroic, with staff and volunteers risking their lives to ensure continued access to testing and treatment. However, people living with HIV in Ukraine and the services that support them face immense challenges as winter approaches.

HIV community organisations in Ukraine quickly adapted their services in response to the Russian invasion on 24 February 2022. In a poster presented at the conference, Valeriia Rachynska from 100% Life – Ukraine’s largest patient organisation of people living with HIV and their supporters – described their approach and what they have learned from their experiences.

Their initial response was guided by their adoption of a “first save lives” approach. This meant that 100% Life began delivering humanitarian services alongside their usual support to people living with or at risk of HIV, TB and drug dependency. Priorities included:

100% Life’s close connections to the community (many of their staff and volunteers are living with HIV) meant they were able to quickly locate people in need of evacuation. Their work was supported by and closely coordinated with the government, donors such as the Global Fund, and other civil society organisations such as the Alliance for Public Health.

As a result of their collective efforts, the worst forecasts that the collapse of the formal health system would lead to outbreaks in HIV and other infectious diseases have not, so far, materialised. Despite the devastating impact of the conflict, many people living in Ukraine have been able to continue to receive HIV, TB and drug dependency services with limited disruptions.

During a conference session on HIV in armed conflicts, Andriy Klepikov, Executive Director of the Alliance for Public Health, presented data highlighting that HIV testing rates had returned to levels similar to those before the February invasion by May, after a substantial drop in tests conducted in March and April. Of the 1852 people diagnosed with HIV since the war began, 89.7% have started their HIV treatment. There has also been a substantial increase in provision of PrEP and naloxone (to prevent opioid overdoses) in the western regions of Ukraine as people internally displaced by the conflict have been supported to access services in these areas. In Lviv, for example, the number of new PrEP patients multiplied approximately seven-fold since February.

Rachynska and her 100% Life colleagues identified several reasons why community-based organisations have been so successful in Ukraine at maintaining services for HIV, TB, and drug dependency. Firstly, they are very adaptable to the community’s needs, with less bureaucratic and hierarchical structures than larger organisations.

For example, Klepikov told a media roundtable how civil society stepped in when a government contractor refused to deliver methadone to those who needed it because they argued it was too risky. “When all others said no, civil society said yes,” said Klepikov, despite the dangers they face. Klepikov also described how volunteers delivered TB medication by bicycle when they ran out of fuel for the vans they usually used for their mobile clinics. “When there were no bicycles, we would walk through the fields,” he added.

Secondly, the COVID-19 pandemic proved useful practice for community organisations in how to quickly adapt services. Innovations introduced during the pandemic were also relevant to a conflict situation including simplified procedures for providing HIV and drug dependency treatment, security protocols, and activities to support mental health.

Finally, but importantly, their donor, the Global Fund, was willing for them to reprogramme their activities as and when required.

Challenges ahead as winter approaches

Despite their impressive achievements so far, Ukraine’s community organisations warned that significant challenges lie ahead. The European Bank for Reconstruction and Development forecasts a 30% drop in GDP, and the United Nations Development Programme predicts 9 out of 10 Ukrainians will be living in poverty, by the end of 2022. Winter is fast approaching, and freezing temperatures will make living with little money and fuel shortages all the more difficult. The implications of this for health outcomes are stark: “How do you think the person with tuberculosis will live, even with medications, if they have no food, no heating, no shelter?” asked Rachynska during the media roundtable.

All the speakers warned that worsening mental health is also a pressing issue. Klepikov explained that all Ukrainians have experienced some level of trauma and will need mental health support. In a deeply moving speech, Rachynska described the pain of being separated from her younger son, who has gone to live with his grandmother in Italy, and the constant stress of air raid sirens and news of airstrikes in areas where colleagues and relatives are living.

Finally, the longer the conflict goes on, the greater the risk that international support for Ukraine will weaken. With the impact of soaring energy prices and inflation being felt globally, governments may be minded to prioritise domestic needs over Russian sanctions and financial support for Ukraine.

What support is needed?

Both 100% Life and Alliance for Public Health have stated that their agility in responding to the conflict would not have been possible without flexible funding from donors such as the Global Fund. Klepikov argued this flexibility must be maintained if community-based organisations are to remain adaptable and responsive to emerging needs.

Ongoing displacement of people within Ukraine means that long-acting products that can support adherence will be important for reducing the risk of outbreaks and ill health. However, innovative products such as injectable forms of PrEP, HIV treatment and buprenorphine (a treatment for opioid dependency) are currently unavailable in Ukraine and the conflict has increased the urgency of their roll-out.

Finally, support for mental health for Ukrainian refugees and those who have remained in Ukraine will be crucial to prevent a mental health crisis. Klepikov highlighted that this means medication as well as talking therapies, and health services and community-based organisations will need funding to provide this.