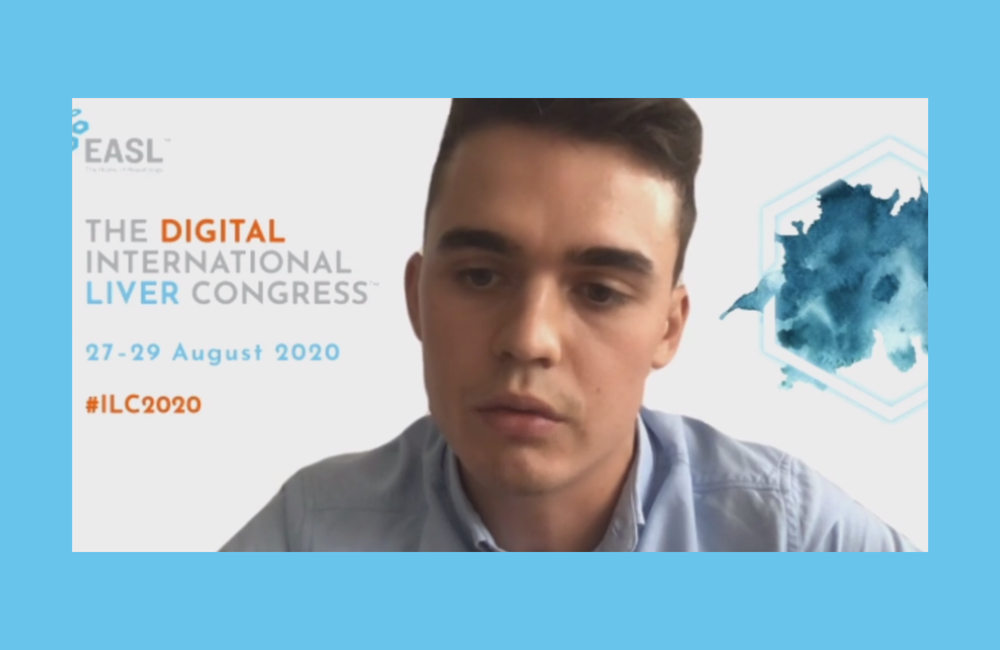 Image: Mathieu Chalouni from the University of Bordeaux presenting to EASL 2020.

People living with HIV do not have a higher risk of liver-related complications or death from liver disease after hepatitis C treatment with direct-acting antivirals, researchers from the French HEPAVIH cohort reported this week at the Digital International Liver Congress.

Mathieu Chalouni of the University of Bordeaux presented an analysis of the relative risk of liver-related events and death in people living with HIV and hepatitis C and people with hepatitis C alone (monoinfected). Liver-related events were defined as liver decompensation, hepatocellular carcinoma (HCC) or liver transplant. Deaths were defined as liver-related if due to decompensation, HCC or liver transplant.

The researchers matched four people with hepatitis C alone from the HEPATHER cohort with one person who had been co-infected with HIV and hepatitis C from the HEPAVIH cohort. Participants were matched by age and sex. All participants were treated with direct-acting antivirals between 2014 and 2017. The analysis excluded people with a history of liver-related events prior to treatment

Participants were followed for a median of 2.8 years after treatment. There was no significant difference in the incidence of liver-related events (17 events in people living with HIV and 66 in the monoinfected group), or 12.4 per 1000 person-years of follow-up in the HIV group and 13.4 per 1000 PY in the hepatitis C monoinfected group) (p = 0.78).

Overall, 88% of people with HIV who died had achieved a sustained virologic response, compared to 82% of monoinfected people who died.

Mathieu Chalouni said that the higher risk of non-liver mortality may be explained by HIV-related inflammation and immunodeficiency or higher alcohol and tobacco consumption. As reported in an article published this month in the Journal of Hepatology, this cohort had a higher risk of non-liver cancer and non-AIDS-defining cancers and these were the chief causes of death in people with HIV during the follow-up period.

"As we plan to initiate the Phase III trial of tesamorelin as a potential treatment for NAFLD/NASH in people living with HIV, Dr. Grinspoon will be one of the key collaborators,” said Luc Tanguay, President and Chief Executive Officer, Theratechnologies Inc.
Theratechnologies press release
5 Feb 20
More editors' picks