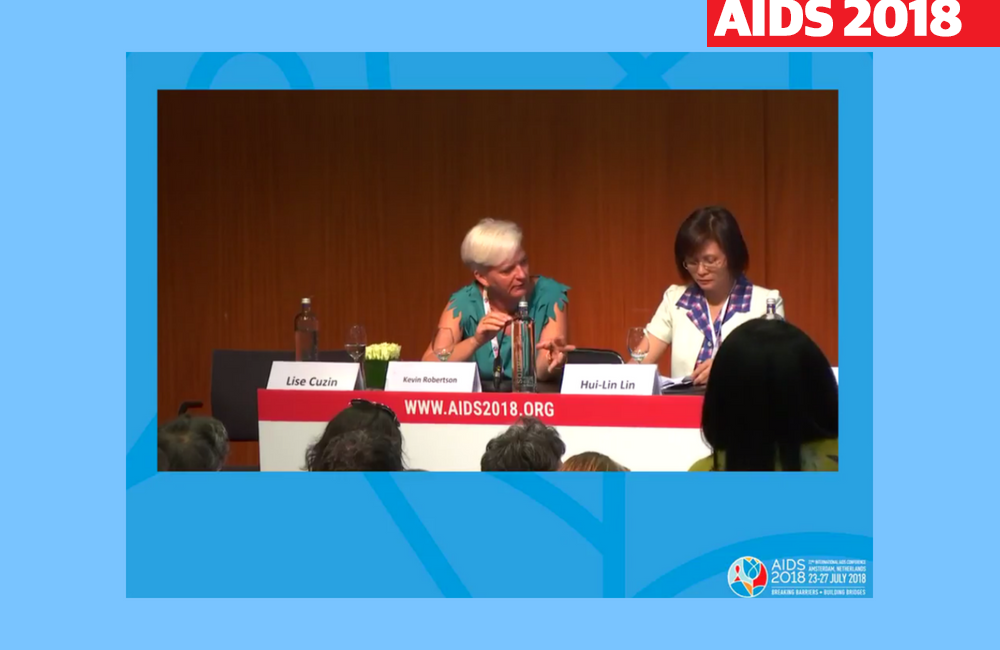 Image from the webcast of Lise Cuzin presenting at AIDS 2018.

A large French study of people taking HIV treatment that contained an integrase inhibitor found that approximately one person in forty who started treatment with dolutegravir stopped taking the drug due to neuropsychiatric side-effects, a significantly higher rate than observed in people taking either elvitegravir or raltegravir, a poster presentation at last month’s 22nd International AIDS Conference (AIDS 2018) showed.

However, this discontinuation rate is much lower than rates observed in some other studies with smaller samples.

Dolutegravir is marketed as Tivicay, and in the three-drug combination pill Triumeq, and in combination with rilpivirine as Juluca. The drug is recommended as a preferred option for first-line antiretroviral treatment in European and United States treatment guidelines and in World Health Organization guidelines, both because of superior efficacy but also because of improved tolerability compared to efavirenz, a drug also associated with central nervous system side-effects.

To investigate the incidence of discontinuation due to side-effects in a large population of patients, and to compare with other integrase inhibitors to detect any effect of the entire drug class, French researchers looked at all patients who received treatment with an integrase inhibitor between 2006 and 2016 (choosing the end of 2016 as the cut-off date in order to avoid any bias in prescribing behaviour that might have arisen as a result of the news of dolutegravir side-effects).

The study sample comprised 21,315 people treated at 18 HIV centres in France. A total of 6274 received dolutegravir, 3421 received elvitegravir and 11,620 received raltegravir. The study population was predominantly male and started treatment with an integrase inhibitor at a median age between 44 and 49, depending on the integrase inhibitor. People taking elvitegravir were more likely to be taking the first antiretroviral regimen (23.1%), while people taking dolutegravir were more likely to be taking the drug combined with abacavir (66.4%).

The rate of discontinuation for neuropsychiatric side-effects was 2.7% in those taking dolutegravir compared to 1.3% for elvitegravir and 1.7% in those taking raltegravir (p < 0.001). The nature of the neuropsychiatric side-effect leading to treatment discontinuation was not specified by all doctors, so it was not possible to detect whether specific problems, such as insomnia, occurred more frequently in those receiving dolutegravir compared to other drugs.

A meta-analysis of five clinical trials of dolutegravir updated previous research on neuropsychiatric side-effects presented at the Congress on Drug Therapy in HIV Infection in 2016, which showed a very low rate of treatment discontinuation due to neuropsychiatric side-effects. This meta-analysis included additional data from the SAILING study in treatment-experienced people, and longer-term data from the SINGLE 1 study in previously untreated people. The analysis compared 1672 people randomised to receive dolutegravir and 1681 receiving non-dolutegravir regimens.

The analysis found no significant difference in the incidence of neuropsychiatric adverse events between those who received dolutegravir and those who did not (5.26 vs 5.21 per 1000 person-years of follow-up, adjusted relative rate 1.05, 95% CI 0.9-1.21, p = 0.55). The use of dolutegravir with abacavir was not associated with an increased risk of neuropsychiatric adverse events.

The nature of the neuropsychiatric event was recorded in all clinical trials included in this analysis. Headache and insomnia were the most frequently reported events regardless of the regimen taken.