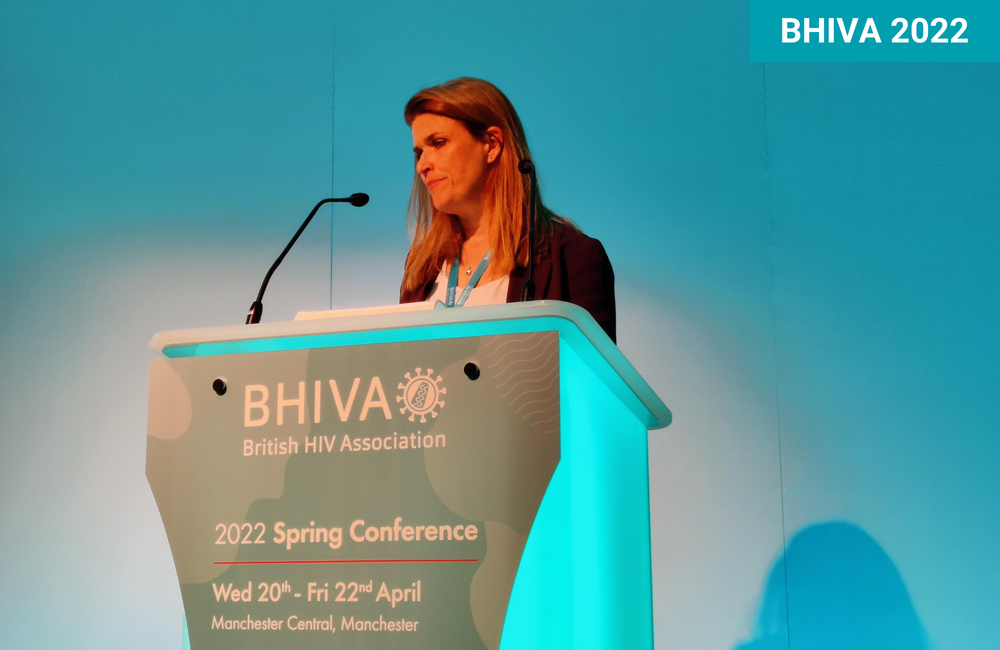 The spring conference of the British HIV Association in Manchester has been its first to be totally in-person since the COVID pandemic started. It is perhaps not surprising that a theme running through a number of studies was loss to care: people with HIV who stop attending clinics and taking treatment, and whether COVID has made this worse.

One study from the UK Health Security Agency found that the proportion of patients who had dropped out of care may have doubled during COVID.

A more focused study presented by Dr Kate Childs of King’s College Hospital, in collaboration with colleagues at St Thomas' and Lewisham Hospitals in south London, has investigated how many of their patients have truly dropped out of care, who they are, and whether they can be re-engaged.

Dr Childs said that the loss of patients was “a significant health inequality” - people who drop out of care are disproportionately from minoritised populations and suffer much worse morbidity and mortality.

“We need to remember 90-90-90 is not irreversible,” she said. “People who are virally suppressed can develop detectable viral loads again; people on antiretroviral therapy can stop taking it; and people in care can be lost to care.”

A UK study that reviewed the status of people ten years after their diagnosis with HIV in 2000-2004 found that nearly 4% had died, but nearly 25% were classed as ‘lost to follow up” (LTFU). Of these, 5.6% had transferred to other clinics; but this left 19% who had truly disappeared from the system.

When these patients reappeared, they often did so because they were very ill. A recent study of people with HIV who were admitted to St Thomas’ and King’s College Hospitals found that 11% and 14%, respectively, were newly diagnosed and 48% and 23% were currently engaged in care. But this left 41% at St Thomas' and no less than 63% at King’s who had been lost to care and reappeared again with conditions serious enough to require hospitalisation. The median viral load in hospitalised patients was 18,000.

There were tragic stories behind some of these patients:

“Woman, 35: lost to follow up ever since 2004. Attended another A&E with headache, didn’t mention HIV, attended ours two days later, wad dead within 12 hours. Coccidioidomycosis.”

Some survived, but with life-altering disabilities:

Concerned about such patients and wishing to avoid similar outcomes, the hospitals were able to secure funding from the Elton John AIDS Foundation to trace patients who had been lost to follow up and re-engage them in care. The funding model meant that as well as baseline funding, the hospitals also received a payment for every patient successfully re-engaged in care for more than a year.

The hospitals firstly went through its own records to identify all patients initially engaged in care between 2012 and 2020 but who had not been seen for at least 12 months.

Secondly, patient records were then cross-matched with national data to find out which patients were attending other clinics in the UK.

Thirdly, a team of dedicated nurses/administrators researched contact details for patients who were lost to follow up and attempted to contact and re-engage them. They used existing phone, text and email details; they checked their centralised NHS electronic patient record for contacts; they sent confidential letters to patients’ last registered home address asking them to make an appointment, to their GPs, and as attached alerts in the electronic patient record.

They also set up alerts in the system that correlates data on emergency department admissions and in another data analysis system, Excelicare.

“Patients we contacted would often not answer immediately,” Dr Childs told aidsmap.com. “But they had a reminder of how to contact us and knew that we knew they were out there.” A response from one patient who re-engaged quickly reads:

“Hello, sorry I couldn’t talk with you. I know I haven’t been for a long time and I’m worry about my self and scared ashamed to come to hospital to see doctor. Yes, I would be grateful if you can arrange appointment to see you, thank you.”

But another from someone who was initially very anxious about returning reads:

“Around us, everyone thinks that HIV is a different sickness to diabetes, blood pressure, even COVID. People in the community will push you to one side. I was running from the clinic. They were calling, calling me.”

In terms of numbers, 2275 records for patients not seen for over a year were found out of 7092 registered at the three NHS trusts (32%).

By carefully checking records and through contact with patients themselves, 1451 patients were found to be in care elsewhere, to have moved abroad, or to have died. This left 824 who had been lost to care - roughly 15% of the 5641 patients who were left once these cases had been removed.

Although most patients could not be found, 153 patients (18.4%) were successfully re-engaged and retained in care for more than 12 months. Dr Childs emphasised that once contacted, many patients continued to need gentle and supportive reminders to maintain engagement.

Who were these re-engaged patients? Their median age was 46, 57% were women, and 71% were Black African or Caribbean while 20% were White. In terms of risk group, 71% were heterosexual, 22% gay or bisexual men, and most of the remaining 8% had some history of injecting drug use.

Forty-five per cent of the re-engaged patients, and 74% of the Black African/Caribbean ones, came from postcodes with the highest indices of deprivation in the UK.

Other factors that particularly stood out were domestic abuse and coercion:

“Ex-partner was very negative about HIV and about taking medication. This ‘Wore off on her,’ but they are now separated, and she has been thinking about coming back ‘to find the courage’. Has been reading about ART and U=U.”

“[She] didn’t want to come to [clinic] or anywhere is hospital as is a beautician and knows lots of staff especially nurses. Doesn’t care who knows her status, but doesn’t want her teenage son ‘tarred’.”

“He still feels guilty about the HIV and tries not to think about it. He doesn’t like to make close friends as he doesn’t want to have to lie about it."

And resulting feelings of anxiety and depression:

“[Patient] has emotional issues and low self-worth. Withdrew from getting treatment. Feels not deserving of treatments. Feels very lonely, in room in shared house but not social. Can see is vicious circle, pushes people away when wants emotional connection. Describes panic attacks.”

Poor mental health as a factor in loss to follow-up was emphasised by several other presentations at the conference, including from Dr Carl de Souza from Croydon University Hospital, which is a few miles south of King’s College Hospital.

Despite this, Dr de Souza said, 40% of HIV facilities did not have a dedicated emergency mental health service – including Croydon, who made an urgent business case in January 2020 that was granted in July 2021, involving a partnership between Croydon and the local mental health NHS trust, the South London and Maudesley.

Now, after its first six months of operation, out of 343 discussions of complex HIV cases by Croydon’s multidisciplinary team (many patients were discussed more than once), 150 discussions, concerning 50 individuals, involved people needing psychiatric intervention. Previously, these people might have had to wait much longer for psychiatric evaluation and possibly been lost to follow-up.

Sixty per cent of them were male, 40% each were of Black and of White ethnicity and 54% had caught HIV heterosexually and 30% through sex between men. The mental health issues patients had split roughly into four overlapping categories: 42% had depression, 41% addiction or substance dependency (including chemsex issues), 31% ‘disordered thoughts’, which means anything from anxiety to frank psychosis, and 17% ‘denial’ which again means anything from minimising some aspects of HIV to outright delusions.

Dr de Souza said there still remained gaps in their mental health support. One was liaison with neurocognitive assessment to diagnose cases of organic brain dysfunction. Another was tackling the stigma people felt through mentoring, peer support, and the promotion of U=U awareness in the community. And a third was to better measure mental health outcomes.

However the mental health referral pathway they had managed to put in place better served people who formed nearly half of the hospital’s complex patient workload.

“Specialist mental health support,” he said, “is essential to ensure a good quality of life for people living with HIV.”