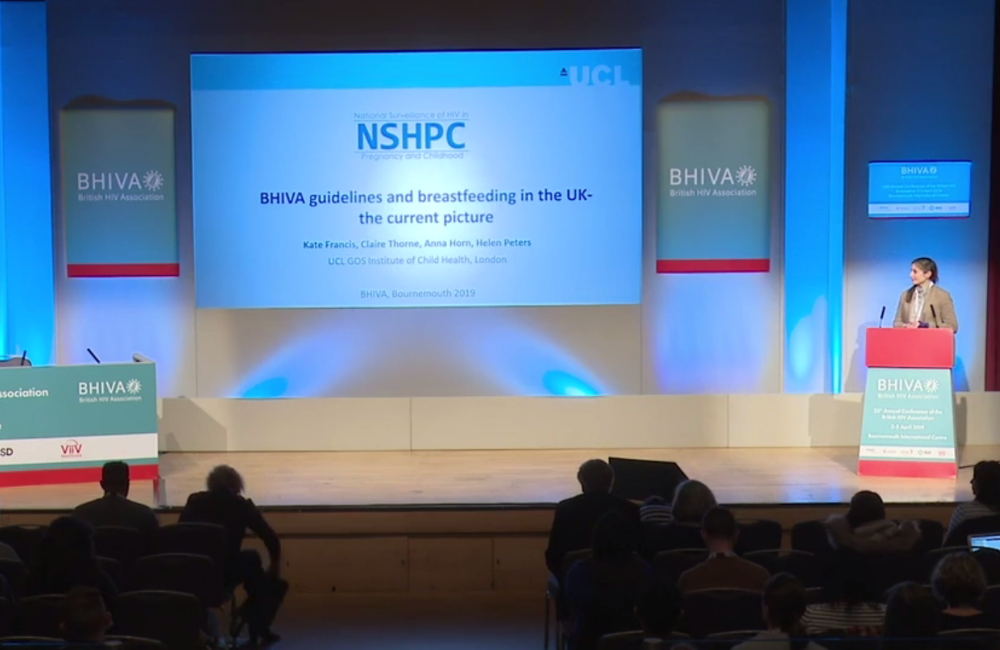 Kate Francis presenting the national surveillance data at BHIVA 2019. Image from the webcast.

Over a third of HIV-positive women in the final stages of pregnancy or who have recently given birth would like to breastfeed, according to research presented to the recent British HIV Association (BHIVA) conference in Bournemouth. But the study also showed that only 27% of women thought it was safe for a mother to breastfeed if her viral load was undetectable. A separate analysis of outcomes among virally suppressed mothers who were supported to breastfeed showed that there have been no cases of mother-to-child transmission and that women had varied and overlapping reasons for choosing to breastfeed.

The current rate of mother-to-child, or vertical, HIV transmission in the UK and Ireland is below 0.3%. BHIVA guidelines recommend that HIV-positive mothers should formula feed their infants. However, they also note that women with an undetectable viral load and good adherence who opt to breastfeed should be clinically supported to do so. Guidelines recommend monthly follow-up and viral load testing for the mother and baby; maternal antiretroviral therapy (rather than infant pre-exposure prophylaxis); infant antibody testing at age 18-24 months; and breastfeeding for as short a period as possible, including exclusive breastfeeding during the first six months. Breastfeeding is to cease in cases of breast infection/mastitis or if the mother or her infant has gastrointestinal symptoms.

National data on supported breastfeeding has been collected since 2012 and enhanced surveillance was introduced in August 2018.

The investigators informed the conference that there were 7187 live-birth deliveries to diagnosed HIV-positive women between 2012 and 2019. In 135 cases, planned and/or supported breastfeeding was reported. These mothers had a median age of 35 years, 93% were diagnosed before pregnancy and 83% were born abroad.

Enhanced data collection was conducted in 102 cases of women who breastfed. In eleven of these, the partner was unaware that the mother was HIV positive and a fifth of these women had problems attending for monthly viral load monitoring.

Common reasons for wishing to breastfeed included bonding with the infant, health benefits for the child, pressure from family or friends, concerns about disclosure, having previously breastfed after HIV diagnosis, and worries about the cost of formula feed.

Ninety of the women had stopped breastfeeding at the time of reporting. The median duration of breastfeeding was seven weeks (range, one day to two years). In 36 cases, cessation was planned, but four women stopped because of a rebound in viral load, three because of mastitis, and six because of problems with latching.

Guidelines were not always followed. Ten women reported mixed-feeding during the first six months and two women continued to breastfeed with mastitis.

There have been no cases of mother-to-child transmission in the context of supported breastfeeding. However, follow-up data is still being collected.

Approximately 58% of the infants of mothers who had stopped breastfeeding have had negative antibody tests. A further 28% are still in follow-up and 6% are lost to follow-up. Two of the infants whose mothers had viral load blips have had antibody tests confirming they are HIV negative, and the two other children are awaiting testing.

Surveillance will continue, but the investigators believe their preliminary data suggests the further normalisation of the maternity experience for HIV-positive women.

The majority of women (89%) said that they had discussed breastfeeding with a healthcare worker. Two-thirds of the women said they had heard of exclusive breastfeeding. Almost 90% said that if they were to breastfeed, they would be willing to have monthly viral load tests to ensure they remained undetectable, and 84% said they would be willing for their baby to have monthly viral load monitoring.

However, two-thirds reported that they did not think it was safe for women with a detectable viral load to breastfeed. Over a third also thought that it was unsafe to breastfeed when viral load was undetectable – only 27% considered breastfeeding safe in this scenario.

The investigators conclude that stigma and secrecy are ongoing issues for childbearing HIV-positive women. They also suggest that it may be time for healthcare providers to have a more open dialogue with HIV-positive mothers about breastfeeding and to optimise support for women who choose this option.

Nyatsanza F et al. 38% of child bearing women with HIV in the UK would like to breastfeed: PACIFY STUDY. 25th Annual Conference of the British HIV Association, Bournemouth, abstract O05, 2019.

A new expert consensus statement explores how providers can give birthing parents who are living with HIV the information they need to decide for themselves.
TheBodyPro
8 Jan 21
Infant feeding

Breastfeeding by mothers taking dolutegravir (DTG) late in pregnancy contributed little to infant exposure, but a median of 4.5 days additional prophylactic coverage for some infants was reported following maternal drug cessation, according to a pharmacokinetic analysis of the DolPHIN-1 study.
Contagion Live
3 Jan 21
Infant feeding

We assert the need for parents living with HIV to have access to the information, support, and tools necessary to make informed infant-feeding decisions.
The Well Project
9 Dec 20
Infant feeding

How do current guidelines impact women's lives and their decisions? What are some important considerations when thinking about this topic - and how might our thinking shift? And what do people living with HIV and their providers need in order for the field of infant-feeding options to expand?
The Well Project
14 Nov 19
Infant feeding

In Zambia, women who are HIV-positive are encouraged to exclusively breastfeed their babies, but those mothers say extended breastfeeding is a telltale sign that they have the virus.
Global Press Journal
15 Apr 19
More editors' picks