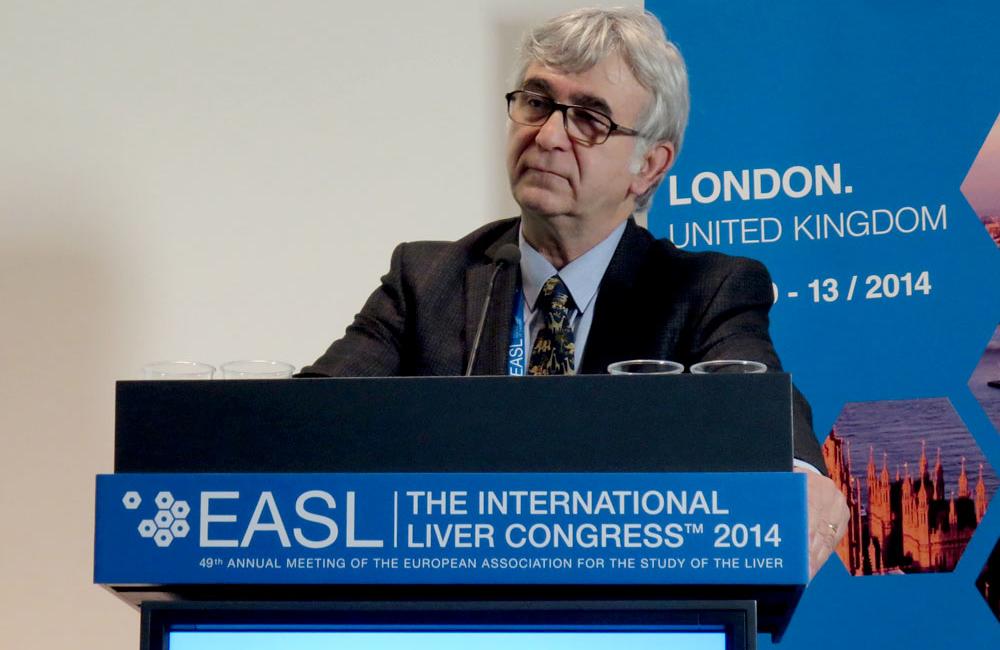 Cihan Yurdaydin, of the University of Ankara, speaking at the International Liver Congress 2014. Photo by Liz Highleyman, hivandhepatitis.com.
This article is more than 8 years old. Click here for more recent articles on this topic

Adding pegylated interferon to entecavir (Baraclude) led to greater hepatitis B virus (HBV) viral load decline and higher likelihood of serological response in people with HBeAg-positive chronic hepatitis B, as did added interferon after long-term nucleoside therapy, but adding interferon after only a short course of antivirals did not improve response, according to a set of studies presented at the 49th Annual Meeting of the European Association for the Study of the Liver (EASL) last week in London.

"Nucleoside analogue antivirals, which interfere with the HBV lifecycle, are standard treatment for chronic hepatitis B," explained EASL Education Councilor Cihan Yurdaydin of the University of Ankara at a press conference summarising the study findings. "Because only a minority of chronic hepatitis B patients achieve HBsAg loss with entecavir, treatment is indefinite for the majority of these patients. Interferon, which has long been the mainstay of hepatitis C treatment, is known to stimulate the natural immune response against viral infections. This synergistic effect should theoretically contribute to improved outcomes for hepatitis B as well."

This multinational analysis included 175 participants in Europe, Turkey and China. About 70% were men, 60% were Asian, 40% were Caucasian and the mean age was approximately 32 years; 5% had liver cirrhosis at baseline.

The researchers looked at a combined response endpoint of undetectable HBV DNA (<200 IU/mL) and HBeAg loss, as well as durability of responses over time.

At 48 weeks, 19% of study participants who added pegylated interferon reached the combined response endpoint, compared with 19% treated with entecavir monotherapy. This difference did not reach statistical significance, but adding interferon was associated with nearly 5-fold higher likelihood of response in a multivariate analysis (odds ratio 4.78).

Looking at secondary endpoints, adding pegylated interferon led to significantly greater declines in HBeAg and HBsAg levels, while the difference in HBV DNA reductions did not reach statistical significance. Only one person experienced HBs antibody seroconversion.

Among participants who continued treatment through 96 weeks, those treated with entecavir plus interferon were numerically more likely than those receiving entecavir monotherapy to experience HBeAg loss (31 vs 20%), HBsAg <1000 IU/mL (26 vs 14%) and the combined undetectable viral load/HBeAg seroconversion endpoint (24 vs 11%), though only the last comparison reached statistical significance.

Looking at sustained or off-treatment response among people who stopped entecavir at week 72, those in the pegylated interferon/entecavir group were more likely to have sustained HBeAg loss (64 vs 25%), sustained undetectable viral load/HBeAg seroconversion (69 vs 25%) and a triple endpoint of low viral load (<2000 IU/mL), HBeAg loss and normal ALT (79 vs 25%), with the latter two comparisons being statistically significant.

Combination therapy was described as safe and well-tolerated. There were eight severe adverse events, including three ALT flares and one case of severe neutropenia. Grade 3 neutropenia occurred in 28% and leukopenia in 9% of participants taking pegylated interferon, but no one taking entecavir alone.

"In order to be able to stop entecavir [or other nucleoside/nucleotide analogue treatment], immune control is needed, and this study has shown that this may be achieved with peginterferon add-on," Yurdaydin explained.

In a related study, Wenhong Zhang  of Fudan University in Shanghai and colleagues looked at sequential combination therapy with nucleoside analogues and pegylated interferon in people with HBeAg-positive chronic hepatitis B who had already taken long-term nucleosides.

This retrospective analysis included 192 people with chronic hepatitis B who had been exposed to nucleoside analogues for at least two years without HBeAg loss or seroconversion. 109 participants continued on nucleoside monotherapy, while 83 received pegylated interferon and nucleosides for a further 48 weeks. They were then followed for 24 weeks post-treatment.

The researchers also found that a baseline HBsAg level below 1000 IU/ml was a good cut-off for predicting treatment response. 100% of patients with <1000 IU/ml at baseline achieved the composite response endpoint and 91% (all but one) achieved HBsAg loss, compared with 54% and 18%, respectively, among people with >1000 IU/ml. HBsAg levels at weeks 12 and 24 were strongly predictive of treatment response in the combination therapy group. However, people who had an HBsAg decline of at least 0.5 log at week 12 or 1.5 log at week 24 still had a chance of responding.

"Sequential combination therapy of [nucleoside analogues] and pegylated interferon effectively resulted in high rates of complete response and HBsAg loss in patients with prior long-term exposure to [nucleoside analogues]," the researchers concluded. "This therapy can be guided by baseline level and dynamic on-treatment pattern of HBsAg."

A third study, however, did not see a benefit of pegylated interferon following a short course of nucleoside/nucleotide analogues.

Presented by Wei-Wen Su from Changhua Christian Hospital, the NEED trial included 280 people with HBeAg-positive chronic hepatitis B in Taiwan. About 70% were men and the mean age was 38 years. About 60% were treatment-naive, 20% had previously used interferon and 30% had previously used nucleoside/nucleotide analogues.

Participants in this double-blind trial were randomly assigned (1:1:1) to receive entecavir, adefovir (Hepsera) or placebo for six weeks. Starting at week 4, they added pegylated interferon and stayed on triple therapy for two weeks, then continued on interferon alone through week 52.

At 52 weeks, the rate of HBeAg seroconversion was numerically higher in the pegylated interferon monotherapy arm (27%) than in the groups that received short-term entecavir or adefovir (22% and 21%, respectively), but the differences were not statistically significant.

After a further 24 weeks of off-treatment follow-up, HBeAg seroconversion rates were 36%, 28% and 23% – again not significant differences (though the pegylated interferon vs adefovir comparison came close to significance).

Treatment was again described as generally well-tolerated. Approximately 10% of participants experienced serious adverse events, but only seven people withdrew early due to adverse events. The most common side-effects were hair loss, headache, fever and muscle aches.

"This kind of sequential combination strategy does not increase the HBeAg seroconversion rate compared to pegylated interferon alfa-2a monotherapy at the end of treatment or at 24 weeks," the investigators concluded. "A strategy of initial combination with [nucleoside/nucleotide analogues] for a longer treatment duration to achieve a lower HBV DNA level before starting pegylated interferon requires further study."

Su explained that the researchers hypothesized that by not fully suppressing HBV viral load before starting pegylated interferon, the residual virus would give interferon-stimulated immune responses something to work on, but this strategy proved ineffective.

Reporters at the press conference questioned the claim that pegylated interferon is 'well tolerated', given the well-known difficult side-effects seen among people taking the treatment for hepatitis C.

"If a disease is more difficult, the side-effect threshold goes up," Yurdaydin explained. "In hepatitis C we now have the luxury of getting rid of pegylated interferon. If we had the luxury in hepatitis B, we would do it too."

He noted that the cost of ongoing nucleoside/nucleotide analogue therapy is often prohibitive, so any way to shorten treatment duration is important. "Together, these ground-breaking data will go a long way to influencing future chronic hepatitis B treatment guidelines," he predicted.

Li G et al. Sequential combination therapy with nucs and peg-INF in HBeAg positive CHB patients with prior exposure to long-term of nucs. 49th Annual Meeting of the European Association for the Study of the Liver, abstract O117, London, 2014.

European Association for the Study of the Liver Three new studies help clarify optimal use of combination therapy with peginterferon and nucleoside analogues in patients with chronic hepatitis B. Press release. April 12, 2014.

World Hepatitis Day is a clear call to improve efforts towards eliminating a disease that globally kills one person every 30 seconds.
The Conversation
28 Jul 21
More editors' picks