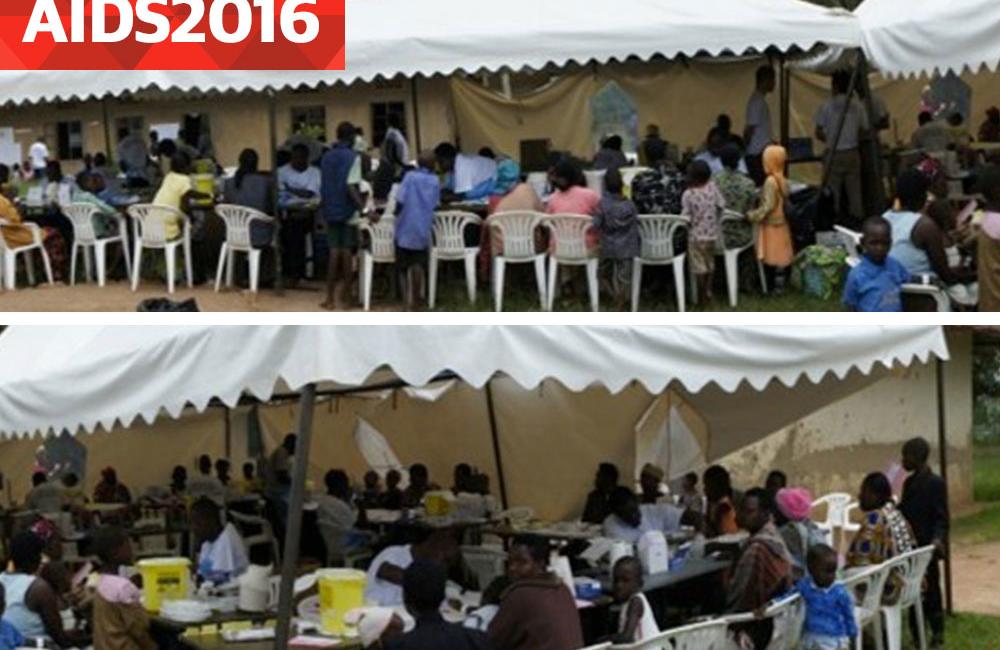 A large study that embeds 'test and treat' for HIV within a larger multi-disease prevention campaign in rural Kenya and Uganda has achieved 82% viral suppression after two years, and already exceeded UNAIDS targets for viral suppression after one year of activity, investigators from the SEARCH study reported today at the 21st International AIDS Conference (AIDS 2016) in Durban, South Africa.

The UNAIDS 90-90-90 targets (90% of people diagnosed with HIV, 90% of diagnosed people on treatment and 90% of treated people virally suppressed) equate to viral suppression in the entire population of people living with HIV of 73%. The SEARCH study achieved viral suppression of 77% after its first year of activity, and 82% after its second year, Dr Maya Petersen of University of California Berkeley School of Public Health reported.

The SEARCH study was designed to test whether offering HIV testing within a larger community screening programme for non-communicable diseases such as diabetes would increase demand for testing, whether a streamlined linkage to care model improves treatment initiation, and whether the sequence of enhanced linkage and person-centred treatment improves retention and viral suppression. The primary outcome being measured in the study is whether the entire package leads to a reduction in HIV infections in the communities where it is offered.

The study has randomised 32 communities, each with around 10,000 inhabitants, to receive either the intervention or standard of care. The intervention consists of:

Dr Maya Petersen presented interim results of the study, looking at the proportions of people on treatment and virally suppressed after one and two years.

Data were collected at baseline and after twelve and 24 months of follow-up. Participants were tested for HIV and viral load was checked for those found to have the infection. ART consisted of a standardised regimen of efavirenz with tenofovir and emtricitabine or lamivudine. The intervention adopted a patient-centred approach to care. Viral load counselling was offered to all patients.

The baseline study population consisted of approximately 78,000 individuals with stable accommodation. The majority (55%) were women, 53% were farmers and one-third were aged 24 years and under. Baseline HIV prevalence was 10%, but this differed by region (West Uganda: 6%; East Uganda: 3%; Kenya: 20%).

By the end of year 2, the intervention exceeded UNAIDS 90-90-90 targets. By this time, 97% of people with HIV were diagnosed; 94% had received ART and 90% were virally suppressed. In addition, 82% of all people with HIV had a viral load below 500 copies/ml.

The intervention was also successful at reaching populations with traditionally sub-optimal levels of engagement in care: 97% of men and 97% of mobile populations had been tested for HIV at least once by month 24. Whereas men were much less likely to know their HIV status at baseline, the gender gap in knowledge of HIV status was virtually eliminated by the end of year 2 and equalised at the end of year 2.

The investigators conclude that use of a multi-disease community-based approach with streamlined patient care, increased the proportion of all HIV-positive people with viral suppression from 45% at baseline to 81% within two years, thus exceeding UNAIDS 90-90-90 targets.

Asked what elements of the intervention appear to have the greatest impact in achieving the overall goal of viral suppression, Maya Petersen told aidsmap.com that the team believed that it was the strong community involvement and patient-centred nature of the care provided, rather than any individual element, that had produced the high levels of linkage to care, treatment initiation and viral suppression.

“This is a truly a community-based study; the idea to include non-communicable disease screening integrated with HIV care came from the community, and it also serves to reduce stigma,” she said. Study investigators characterise the model of care being offered as “walking with the patient every step of the way along their journey”, and say that practices such as flexible clinic hours have contributed to the high level of engagement seen in the study.

The scale of the study – nearly 78,000 people – and the range of communities involved in two countries make the results of the SEARCH study among the most significant contributions to the emerging body of evidence supporting the implementation of `test and treat` programmes in lower-income settings. Results showing the effect of the intervention on the study’s primary outcome, HIV incidence, are due in 2017.