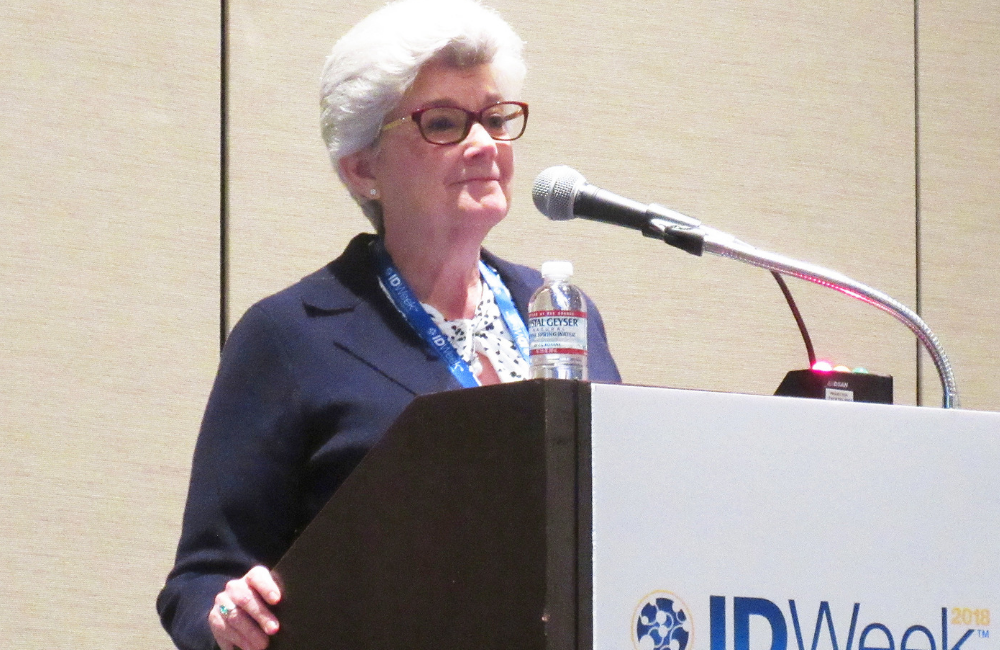 In the switching study, 93.7% of people who switched to the doravirine regimen and 94.6% of those who stayed on their baseline regimen still had undetectable HIV RNA at 24 weeks, showing that the doravirine combination is non-inferior.

Doravirine, a next-generation non-nucleoside reverse transcriptase inhibitor (NNRTI) from Merck/MSD, has a unique resistance profile and is active against HIV with common NNRTI-resistance mutations.

Last month the US Food and Drug Administration approved doravirine both as a stand-alone tablet (sold as Pifeltro) and as part of a once-daily single-tablet regimen (sold as Delstrigo) that also includes tenofovir disoproxil fumarate (TDF) and lamivudine (also known as 3TC).

Princy Kumar of Georgetown University presented the first reported data from DRIVE-SHIFT, a phase 3 study evaluating Delstrigo as a switch option for people on a stable regimen with undetectable viral load.

The study included 670 people on stable antiretroviral therapy with HIV RNA below 40 copies/ml for at least six months. About 85% were men and the median age was about 43 years. The average CD4 count at baseline was approximately 660 cells/mm3, reflecting good current immune function, but around 17% had a history of AIDS.

A majority (about 70%) were taking regimens containing a boosted protease inhibitor, about a quarter were taking NNRTIs and around 5% were taking combinations that included the boosted integrase inhibitor elvitegravir. They had no prior history of treatment failure or known resistance to the study drugs.

Participants were randomly assigned to switch to Delstrigo immediately or after a six-month delay. The immediate group had 48 weeks of follow-up and the delayed group had 24 weeks.

At week 24, 93.7% of people in the immediate Delstrigo group had HIV RNA < 50 copies/ml, compared with 94.6% of those who stayed on their existing regimen. Among those who took Delstrigo for the full 48 weeks, 90.8% still had undetectable viral load.

Virological failure rates were low in both arms (1.8%). No one who took Delstrigo developed drug resistance, and all 24 participants with NNRTI resistance at baseline maintained viral suppression.

Kathleen Squires of Thomas Jefferson University in Philadelphia presented updated findings from the phase 3 DRIVE-AHEAD study, which evaluated first-line treatment with Delstrigo versus a co-formulation containing the NNRTI efavirenz, TDF and emtricitabine (sold as Atripla).

This study enrolled 728 people starting HIV treatment for the first time. About 85% were men, half were white and the median age was 31 years. The mean baseline CD4 count was approximately 420 cells/mm3, about 22% had high viral load above 100,000 copies/ml and 14% had a history of AIDS.

Participants were randomly assigned to receive Delstrigo or Atripla. To 'blind' the study, because the dosing regimens are not the same, participants received placebos for the opposite co-formulation. They were instructed to take Delstrigo or its matching placebo any time they chose with or without food, and Atripla or its placebo on an empty stomach at bedtime in an effort to minimise neuropsychiatric side-effects of efavirenz.

Squires reported 48-week results from the study at last year's International AIDS Society Conference on HIV Science in Paris. At that time point, 84% of people in the Delstrigo arm and 81% of those in the Atripla arm had HIV RNA below 50 copies/ml, showing that the doravirine co-formulation was non-inferior.

At IDWeek Squires reported that Delstrigo continued to perform well at week 96, with 77.5% still having undetectable viral load, compared with 73.6% in the Atripla arm; 9% and 8%, respectively, experienced virological failure. Among participants who underwent resistance testing, resistance to doravirine and nucleoside/nucleotide reverse transcriptase inhibitors was low (less than 2%) and no additional resistance to doravirine was observed between weeks 48 and 96.

Treatment with Delstrigo was generally safe and well tolerated in both studies, but there were some notable differences in side-effects between the doravirine-based combination and the comparison regimens.

In DRIVE-SHIFT, about 20% of study participants who switched to Delstrigo reported drug-related side-effects, compared with 2% of those who stayed on their baseline regimen. Only 1.6% of Delstrigo recipients stopped treatment due to side-effects.

In DRIVE-AHEAD, about half as many people taking Delstrigo relative to those on Atripla reported drug-related adverse events at week 96 (32% vs 65%, respectively) or discontinued treatment due to adverse events (3% vs 7%). Serious side effects were rare in both arms (1% or less). The difference was largely due to fewer neuropsychiatric side-effects in the Delstrigo arm including dizziness (10% vs 38%), sleep disorders (14% vs 28%), abnormal dreams (5% vs 12%), altered cognition (5% vs 9%) and depression/self-injury/suicide (5% vs 7%).

In both studies, lipid profiles were more favourable for those taking Delstrigo. Among people starting treatment in DRIVE-AHEAD, cholesterol and triglyceride levels showed little or no change in the Delstrigo group but increased in the Atripla group. In DRIVE-SHIFT, cholesterol and triglycerides decreased when people switched to Delstrigo while remaining stable in those who stayed on their baseline regimen.

Of note, Merck’s combination pill Delstrigo contains TDF rather than the newer tenofovir alafenamide (TAF). TAF is associated with less kidney and bone toxicity, and Gilead Sciences now includes the new version in its co-formulations. Unlike TAF, however, TDF is available as a generic and can be used by other companies.

While acknowledging that there could be more kidney-related side-effects with Delstrigo, Kumar stressed that we have more than two decades of experience with TDF use and it is safe for a majority of people.

"As clinicians we have learned to be able to understand and recognize the side effects and avoid TDF in patients who have renal or bone problems or who are at high risk," she said. "These years of experience knowing how to manage TDF makes me feel very comfortable that this is an option for patients who would like to make a switch."