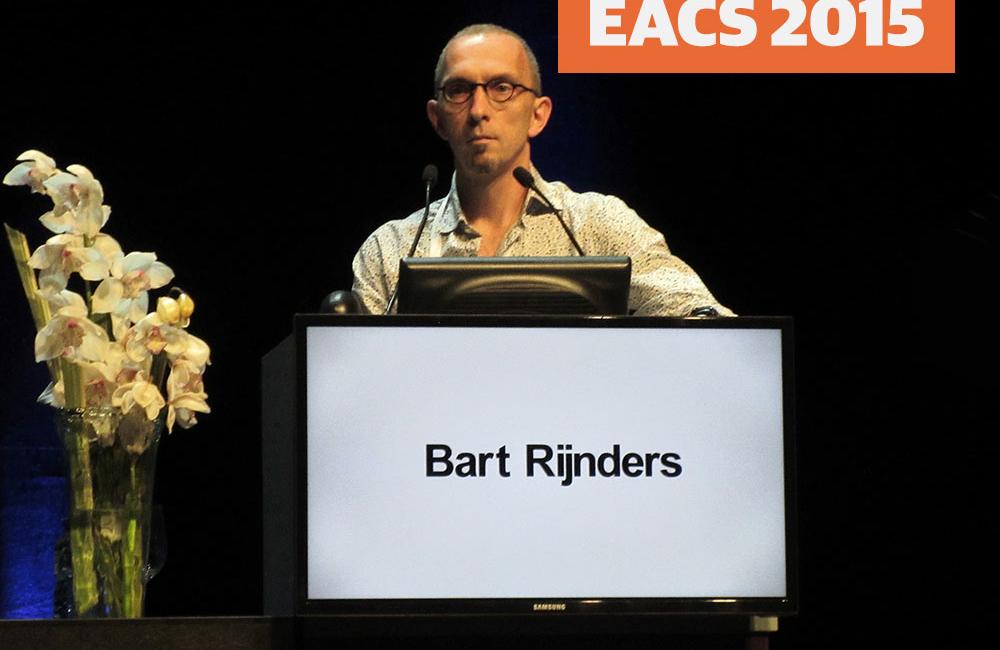 A single-tablet regimen containing the new tenofovir alafenamide (TAF) – to be marketed as Genvoya – suppressed HIV as well as a co-formulation containing the older tenofovir disoproxil fumarate (TDF), according to a poster presented this week at the 15th European AIDS Conference in Barcelona. A related study found that people who switched from an atazanavir (Reyataz) regimen to the new combination had superior virological outcomes, and in both trials participants saw improvements in kidney and bone biomarkers.

Gilead Sciences' TAF is a new pro-drug formulation that delivers the active agent to HIV-infected cells more efficiently than the current TDF formulation (Viread, also in Truvada, Atripla, Eviplera and Stribild). TDF is generally safe and well-tolerated but it can cause a small amount of bone loss soon after starting therapy and can lead to kidney problems in susceptible people.

Presenter Bart Rijnders from Erasmus Medical Centre in Rotterdam explained that TAF has a longer half-life, allowing more time for active tenofovir to enter CD4 T-cells. TAF therefore produces sufficient intracellular drug levels with a smaller dose, which means a lower concentration in the blood and less drug exposure for the kidneys, bones, and other organs and tissues.

TAF vs TDF with elvitegravir

As described in a late-breaking poster, David Wohl of the University of North Carolina at Chapel Hill and colleagues did a head-to-head comparison of first-line therapy using single-tablet regimens containing the integrase inhibitor elvitegravir (150mg), the booster cobicistat (150mg), emtricitabine (200mg) and either TAF (10mg) or TDF (300mg). The existing TDF co-formulation is marketed as Stribild and the TAF co-formulation will be called Genvoya.

These two international randomized phase 3 studies together enrolled 1,733 treatment-naive participants with near-normal kidney function. About 85% were men, about 40% were white and the median age was 34 years. The median baseline CD4 cell count was approximately 400 cells/mm3 and nearly a quarter had high viral load (> 100,000 copies/ml).

As described at this year's Conference on Retroviruses and Opportunistic Infections, both co-formulations demonstrated similar high efficacy at 48 weeks: 92% for Genvoya and 90% for Stribild. The EACS poster reported that viral suppression rates remained high at 96 weeks: 87% and 85%, respectively.

Treatment was generally safe and well-tolerated, with similar rates of overall and serious adverse events, but TAF had less detrimental effects on the kidneys and bones than TDF. Rates of discontinuation due to adverse events were low in both treatment arms (1.2% for Genvoya and 2.3% for Stribild). The most common side effects were headache, diarrhoea and nausea.

Multiple laboratory tests of kidney function and specific tubular function favoured the TAF regimen. No cases of renal tubulopathy (including Fanconi Syndrome) occurred in the TAF-containing arm, compared with two cases in the TDF-containing arm (one of which led to treatment discontinuation).

Total, LDL and HDL cholesterol increases were significantly larger in the TAF arm – a known side effect of tenofovir – but the total-to-HDL cholesterol ratio remained stable. The number of people who needed to start lipid-modifying medications was similar in both arms: 3.8% for Genvoya vs 4.4% for Stribild.

"After two years, TAF combined with [elvitegravir/cobicistat/emtricitabine] produced a high rate of virologic suppression (87%) and remained non-inferior to Stribild in treatment-naive patients," the researchers concluded. "[Genvoya] continued to have a statistically superior bone and renal safety profile compared with Stribild."

Switching from atazanavir/ritonavir & TDF to Genvoya

Rijnders presented findings from a sub-analysis of another TAF study in which people with stable viral suppression (< 50 copies/ml for at least a year) on TDF-containing regimens were randomised to either stay on the same treatment or switch to Genvoya.

The overall study population included 1,436 participants. They had near-normal kidney function (median estimated glomerular filtration rate [eGFR] 106 ml/min) and 9% had proteinuria (protein in the urine) at baseline. Results from the full study were presented at the International AIDS Society Conference this summer in Vancouver.

This sub-analysis focused on 601 participants who switched to Genvoya from a regimen of TDF, emtricitabine and atazanavir boosted with either ritonavir or cobicistat. In this analysis 86% were men, about 65% were white, the median age was 41 years and the median CD4 count was approximately 650 cells/mm3.

At 48 weeks, 97% of participants who switched to Genvoya and 92% of those who stayed on their atazanavir regimen maintained HIV RNA <50 copies/ml. No patients in this sub-analysis experienced virological failure (viral load > 50 copies/ml). Rijnders noted that the difference in response rates was driven by missing data, mostly due to withdrawal of consent.

Again, treatment was generally safe and well-tolerated. Rates of most adverse events were similar in the two treatment arms, but as expected elevated bilirubin was more common with atazanavir (55% vs < 1% with Genvoya).

Measures of proteinuria and specific tubular proteinuria improved significantly. However, Rijnders explained that cobicistat inhibits excretion of serum creatinine, which can result in elevated levels that do not actually reflect impaired kidney function.

"In both the overall population and in prior boosted atazanavir and [emtricitabine]/TDF users, those switching to [Genvoya] had significantly more virological success," the researchers concluded, as well as significant improvements in spine and hip BMD, less osteoporosis, and improvements in proteinuria, tubular proteinuria and albuminuria, but higher creatinine and blood lipids.

Based on favourable study findings to date, Gilead has requested US and European regulatory approval of the elvitegravir/cobicistat/emtricitabine/TAF single-tablet regimen. The US Food and Drug Administration is scheduled to make a decision in November.

In addition, the company has also requested approval of other TAF single-tablet regimen containing rilpivirine or darunavir and a dual co-formulation of TAF and emtricitabine that would be a successor to Truvada. Stand-alone TAF is also being developed as a treatment for hepatitis B.