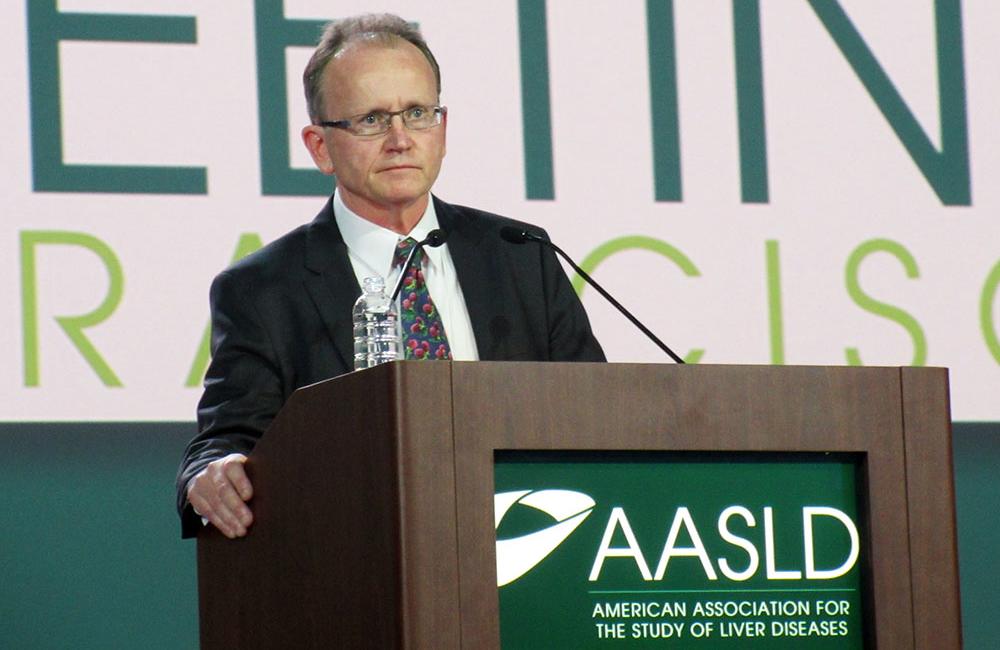 An 8-week triple combination of Gilead Sciences' sofosbuvir, velpatasvir and GS-9857 showed a high sustained response rate in a phase 2 study of people with difficult-to-treat hepatitis C virus (HCV), including treatment-experienced people with HCV genotype 3 and liver cirrhosis, according to results presented on Sunday at the 2015 AASLD Liver Meeting in San Francisco, USA. A 6-week regimen appeared inadequate, however, and more than 8 weeks may be needed for people who have previously used direct-acting antivirals.

Interferon-free direct-acting antiviral (DAA) therapy has revolutionised treatment for chronic hepatitis C, but there is still room to optimise therapy for difficult-to-treat patients, enabling them to take advantage of shorter-duration, ribavirin-sparing regimens like those currently available for easier-to-treat people. Ideally, such a regimen would be pan-genotypic, meaning it could be routinely prescribed without the need for genotype testing.

This study included 157 participants divided into seven cohorts with various characteristics predicting good or poor treatment response. All were treated with the triple regimen for 4, 6 or 8 weeks. Sofosbuvir and velpatasvir were taken as a once-daily fixed-dose coformulation (400/100mg); GS-9857 (100mg) was also taken once daily.

Gane presented results for these first three cohorts at the EASL International Liver Congress earlier this year. Response rates ranged from 67% to 93% in the 6-week arms, but fell to a dismal 27% in the 4-week arm.

At the AASLD meeting, Gane presented findings for the final four cohorts of harder-to-treat patients:

Both genotype 1 cohorts were treated for 8 weeks. The genotype 3 treatment-naive and treatment-experienced groups received 6 and 8 weeks of therapy, respectively.

In these four cohorts, a majority of participants were men (56% to 82%), most were white (67% to 95%) and mean ages ranged from 52 to 58 years.  A third had the favourable IL28B CC gene pattern. In the protease inhibitor-experienced cohort 39% had cirrhosis.

All participants in all four cohorts completed treatment with no discontinuations.

Looking more closely at the five participants who relapsed, there was no consistent pattern of drug resistance-associated variants (RAVs) at baseline or at the time of relapse. At baseline, three people had NS3 RAVs (R155K x 2, I170T, V36M, T54S and Q168K) while two had NS5A RAVs (M28V and L31M). At relapse, two had NS3 RAVs and two had NS5A RAVs. One relapser had no RAVs at either baseline or relapse. The presence of NS3 RAVs at baseline appeared to have more influence on treatment response (88% with RAVs vs 96% without) than baseline NS5A RAVs (90% vs 95%, respectively).

Treatment with the triple regimen was generally safe and well-tolerated. Only three of the 82 participants in these four cohorts experienced serious adverse events and no one discontinued treatment for this reason. The most common side-effects were headache, fatigue, nausea and diarrhoea.

The 8-week triple regimen was "very robust" and "looks highly efficacious" for people with previous pegylated interferon/ribavirin failure, including people with cirrhosis, Gane said. But for DAA-experienced people, "I think you have to go beyond 8 weeks," and future data will tell whether that needs to be 10 or 12 weeks.