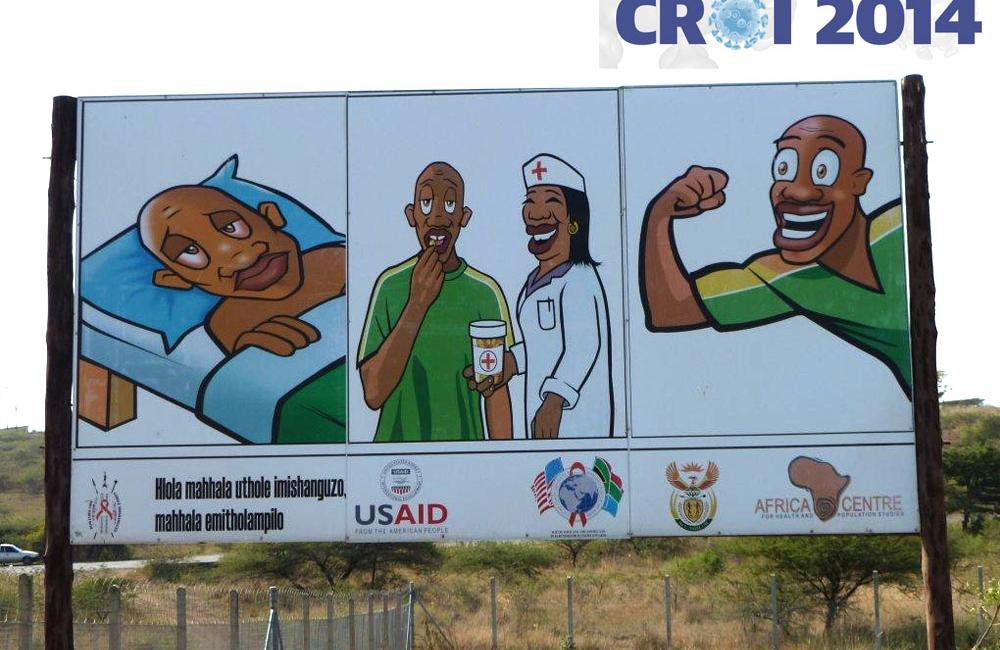 Billboard, detail from slides by Till Bärnighausen of the Africa Centre for Health and Population Studies, presented at CROI 2014.

Male life expectancy in rural South Africa has improved far less dramatically than women’s life expectancy since the introduction of antiretroviral therapy, due to a growing disparity in uptake of treatment, an international research group reported on Thursday at the 21st Conference on Retroviruses and Opportunistic Infections (CROI) in Boston.

In particular, 57% of deaths in HIV-positive men between 2000 and 2011 occurred before seeking any form of HIV care, compared to 41% in women, in a large rural district in northern KwaZulu-Natal that has been the subject of previous detailed research on the impact of HIV and antiretroviral treatment in South Africa.

The Hlabisa district of northern KwaZulu-Natal has been the subject of the most intensive study of the impact of antiretroviral therapy in Africa. Treatment has been delivered through a nurse-led programme based in primary health clinics since 2004. Seven per cent of all adults in the area were receiving antiretroviral therapy by 2012. As a result of this rate of coverage, life expectancy has risen by one year for each year that antiretroviral therapy has been available since 2004, “one of the fastest life expectancy recoveries in the history of public health”, according to Dr Till Bärnighausen of the Africa Centre for Health and Population Studies, the lead investigator on the study.

Nevertheless, women remain more likely to benefit from antiretroviral therapy in sub-Saharan Africa. The majority of people in care and receiving treatment in many antiretroviral treatment programmes are women. To some extent, this is a consequence of the epidemiology of HIV in sub-Saharan Africa, where younger women are more likely to acquire HIV than men of an equivalent age.

In order to assess sex disparities in HIV-related survival before and after the introduction of antiretroviral therapy, researchers analysed demographic data gathered by the Africa Centre for Health and Population Studies in KwaZulu-Natal province between 2000 and 2011. Demographic data were available for 52,964 women (6140 deaths from all causes and 3729 HIV-related deaths) and 45,688 men (6150 deaths from all causes and 3500 HIV-related deaths). Causes of death were ascertained by verbal autopsy. Individual data were linked to clinical records from the public-sector HIV treatment and care programme.

To determine whether antenatal testing and prevention of mother-to-child transmission (PMTCT) programmes had had any impact, the researchers assessed utilisation of antiretroviral therapy in women according to pregnancy status. They found no substantive difference in the adjusted odds of accessing antiretroviral therapy; regardless of pregnancy women were 2.4 times as likely as men to be on treatment (pregnant women AOR 2.374, non-pregnant women AOR 2.52, p = 0.007 and p = 0.010 respectively). Older age and distance to travel to the clinic were also associated with the likelihood of accessing treatment, regardless of sex.

At this point, researchers can’t explain why the difference exists, but said that more efforts need to be made to design male-friendly clinics, and to investigate whether female nurses hold attitudes that discourage men from accessing clinic services. But he also acknowledged that local attitudes towards masculinity may impede health-seeking behaviour, and that health promotion to men needs to address this issue in order to ensure that men do not miss out on the benefits of antiretroviral treatment.

Once Engaged in Care, Trans Women Have High Rates of HIV Suppression