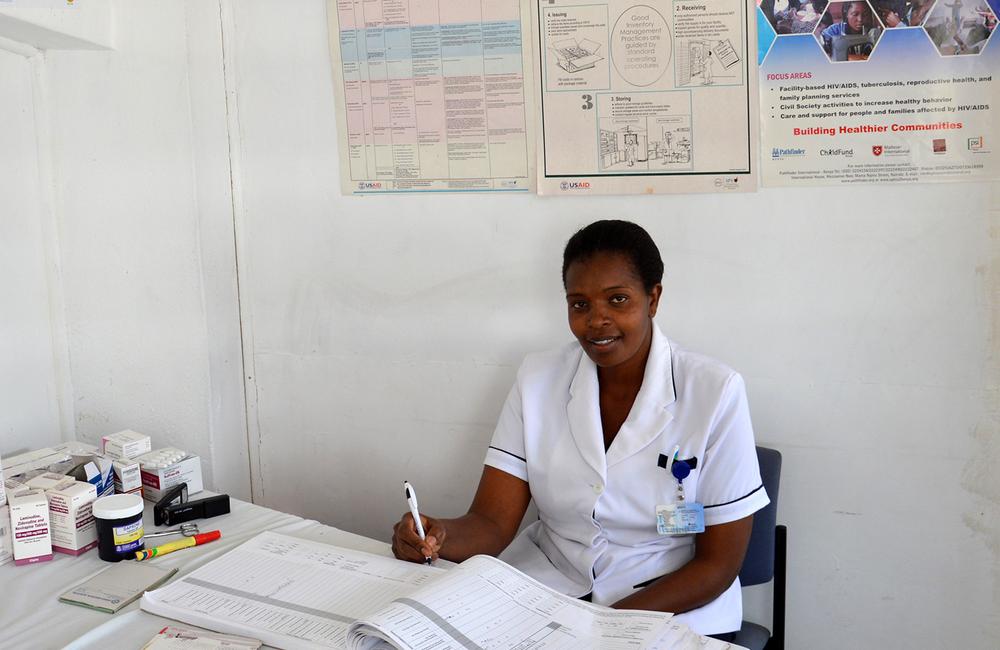 A nurse in the TB-HIV room of a clinic in Kenya. © 2013 Alfredo L Fort, Courtesy of Photoshare

Tuberculosis incidence in sub-Saharan Africa is falling too slowly to meet global targets of an 80% reduction by 2030, and where incidence is falling, the decline is strongly associated with the extent of antiretroviral coverage in people living with HIV, a study by former World Health Organization modelling experts has found.

The findings, published in the Bulletin of the World Health Organization in June 2019, come from a modelling study carried out by Christopher Dye and Brian Williams.

They looked at the relationship between TB incidence, diagnosis, treatment, HIV burden and antiretroviral coverage in 12 countries in sub-Saharan Africa with a high standard of TB and HIV surveillance data.

TB disproportionately affects people living with HIV, with immune suppression leading to the reactivation of latent TB infection. Countries with the highest prevalence of HIV also have amongst the highest TB incidence. Antiretroviral therapy reduces the risk of developing TB, as does isoniazid preventive therapy.

The researchers modelled the impact of antiretroviral treatment and isoniazid preventive therapy on TB incidence using data on availability and uptake of both interventions. Both interventions have been shown to reduce the incidence of TB in people with HIV They also looked at the impact of TB case detection and TB treatment on TB incidence, assuming that detection and treatment of TB would interrupt transmission chains and prevent new cases.

TB incidence and prevalence rose in all countries from 1990 as a consequence of the rise in HIV prevalence but began to decline as case detection and treatment outcomes improved.

Antiretroviral therapy began to be introduced from 2003, although the rate of increase in coverage varied between countries. Whereas coverage increased at a steady rate between 2003 and 2016 in Botswana, coverage began to increase at a more rapid pace after 2008 in South Africa, eSwatini, Namibia, and Zimbabwe.

Overall, modelling found an inverse correlation between ART coverage and TB incidence, and regression analysis found that ART coverage was associated with a higher proportion of TB cases prevented in people living with HIV (r2=0.68, p< 0.001).

Although approximately 500,000 TB cases were prevented in South Africa between 2003 and 2016 due to antiretroviral treatment, the model estimates, this only amounted to preventing 11.2% of TB cases, because of limited ART coverage.

With little evidence that TB diagnosis and treatment are leading to an acceleration in TB reduction, increasing the coverage of ART is important.

In the 12 countries studied, antiretroviral treatment prevented between 1.88 million and 2.06 million TB cases in people living with HIV, or 17.6% of the cases that would have occurred otherwise.

In contrast, isoniazid preventive therapy had a negligible effect on TB incidence despite strong evidence of effectiveness and guidance from the World Health Organization on the need to implement IPT. Isoniazid preventive therapy coverage did not exceed 4.2% in South Africa, the country most successful in implementing IPT, and three countries in the region (South Africa, Malawi and Zimbabwe) accounted for 91% of all IPT coverage.

The researchers failed to find any correlation between the estimated level of case detection and TB incidence across the 12 countries. If case detection is higher, more TB cases should be diagnosed and treated, preventing onward transmission. In conclusion, the authors say that TB incidence is declining too slowly to meet international targets. To meet the 2030 WHO End TB strategy’s target of an 80% reduction in TB incidence, the incidence of TB needs to fall by 10% a year. With little evidence that TB diagnosis and treatment are leading to an acceleration in TB reduction, increasing the coverage of ART will make an important contribution to reducing TB incidence where the prevalence of HIV is high.

Failure to respond to antibiotics may serve as a strong indicator of tuberculosis among people living with HIV who have symptoms of the disease, according to findings published in Open Forum Infectious Diseases.
Healio
15 Jan 20
TB transmission & prevention

A new study in non-human primates could breathe new life into the BCG vaccine. The key advance it reports is that delivery of the vaccine intravenously — directly into the bloodstream — rather than into skin or muscle, boosted protection against tuberculosis, particularly in the lungs. The translation of those findings into clinical practice is still some way off, but the pay-off could be huge.
Nature
7 Jan 20
TB transmission & prevention