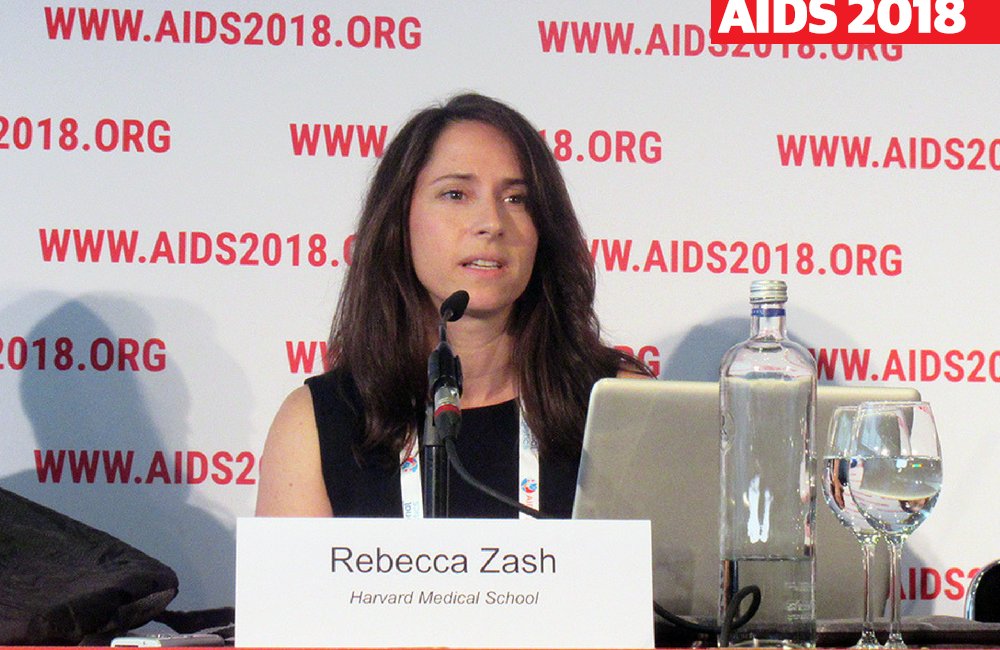 Dolutegravir treatment at the time of conception is associated with a higher risk of neural tube defects in infants exposed to the drug when compared to efavirenz, a study of births to women living with HIV in Botswana has shown. Rebecca Zash of Beth Israel Deaconess Medical Center, Boston, stressed that the results are a preliminary safety signal and require further follow-up.

The findings from the Botswana surveillance study, released in May, led to safety warnings by the European Medicines Agency and the US Food and Drug Administration. The agencies warned that women living with HIV who can become pregnant should not use the integrase inhibitor dolutegravir (Tivicay, also in Triumeq and Juluca) without effective contraception. Subsequent World Health Organization (WHO) treatment guidelines, released yesterday, stress the importance of consistent and reliable contraception if women of childbearing potential opt to take the drug.

Further details of the Botswana surveillance study were presented at the 22nd International AIDS Conference (AIDS 2018) on Tuesday by Dr Rebecca Zash on behalf of the Tsepamo study team. The Tsepamo surveillance study looked at birth outcomes at eight government hospitals in Botswana between August 2014 and May 2018 and covered around 45% of all babies delivered during the period.

A new analysis, looking at women who started dolutegravir-based treatment or another antiretroviral regimen prior to conception, was conducted in 2018 in preparation for the development of new WHO treatment guidelines.

The surveillance study has previously reported that women who started dolutegravir during pregnancy did not have an elevated risk of an adverse birth outcome (stillbirth, preterm birth, small for gestational age or neonatal death) compared to women who started efavirenz.

A total of 89,064 births were captured in this surveillance study for neural tube defects (426 in women taking dolutegravir, 5787 in women taking efavirenz and 5513 taking another antiretroviral regimen at the time of conception).

After delivery, 99.7% of infants underwent a physical examination by a midwife to check for neural tube defects. Midwives reported 86 cases (an incidence of 0.10%, 95% CI 0.08-0.12%), of which 42 were spina bifida (incomplete development of the spine leading to protrusion of the neural tube through vertebrae). The remainder were more severe defects affecting the brain and skull. Twenty-two of 86 cases occurred in stillborn infants.

The prevalence of neural tube defects was higher in infants born to women exposed to dolutegravir at the time of conception compared to women exposed to efavirenz or other regimens. Four cases occurred in women taking dolutegravir at the time of conception; none was taking folate supplements prior to pregnancy. No neural tube defects were identified in infants born to women who started dolutegravir treatment during pregnancy.

The news of a potential safety problem and the subsequent guidance from regulatory agencies and WHO has caused some ministries of health in lower- and middle-income countries to pause in their plans to implement dolutegravir-based treatment as the preferred first-line treatment, Meg Doherty of WHO told a symposium organised to discuss the results of the Tsepamo study.

However, a modelling study presented by Caitlin Dugdale of Massachusetts General Hospital shows that avoiding the use of dolutegravir in women of childbearing age carries risks for women, children and their partners that might outweigh the risk of neural tube defects.

Using a well-tested model of the South African HIV epidemic and treatment patterns in South Africa (the CEPAC model), Dugdale and colleagues looked at the impact on mortality, sexual transmission, vertical transmission and adverse birth outcomes of using either a dolutegravir- or an efavirenz-based regimen over the next five years in 3.5 million women who will be on treatment (1.8 million starting treatment over this period). The model also looked at the impact of the two regimens on 1.1 million children projected to be born to women on antiretroviral treatment.

Assuming dolutegravir is more effective than efavirenz in suppressing viral load and assuming that neural tube defects occur at a similar prevalence to that reported in the Tsepamo study and other studies of efavirenz, dolutegravir would save 28,400 more adult lives than efavirenz, prevent 52,800 more cases of sexual transmission and prevent 5000 more infant infections than efavirenz, the model found.

The model was sensitive to assumptions about fertility, treatment efficacy and the prevalence of neural tube defects, meaning that further surveillance data will help to fine-tune the projections.

The findings highlight the trade-offs inherent in making decisions about the most appropriate first-line regimen, especially in countries with large treatment programmes and high fertility rates.

But, as Maggie Little of Georgetown University commented at the end of the symposium, “Policy may not be the right locus for determining acceptable trade-offs in this case; policy may be about supporting meaningful choice for women.” This view was echoed in an eloquent overview of the issues from the perspectives of women living with HIV by Martha Akello of the International Community of Women Living with HIV.

“We want to exercise choice,” she said. “This is not a 'one dress fits all' situation!”

View details of this session on the AIDS 2018 website.

Women and HIV in the United Kingdom

This report provides a summary of the HIV epidemic in women in the UK and contains information relating to: trends in new HIV diagnoses in women, clinical outcomes, HIV testing patterns, quality of life and experiences of women living with HIV, satisfaction with HIV services and extent that social and women’s health needs are met.
Public Health England
2 Nov 19
Long-acting HIV treatment

In general, women shared many of the same positive perceptions of LA ART that men did but offered unique insight.
Contagion Live
7 Oct 19
Contraception

The World Health Organization (WHO) convened a Guideline Development Group (GDG) meeting from 29 to 31 July 2019 to review global guidance on contraceptive eligibility for women at high risk of HIV acquisition to and determine whether revisions to the fifth edition of the Medical eligibility criteria for contraceptive use (MEC) were needed.
World Health Organization
29 Aug 19
Treatment for women

What’s in a pill? Promise, uncertainty, rands, lives & loves … but rights? What the next big thing in HIV treatment for SA shows us

In September, the country will switch to a new way of treating HIV that is expected to save the country billions and result in more than 600,000 fewer infections in the next two decades. South African researchers are changing the way we treat the virus here and abroad. But what does it mean for the world’s largest HIV treatment programme and the women in it?
Bhekisisa
29 Jul 19
More editors' picks